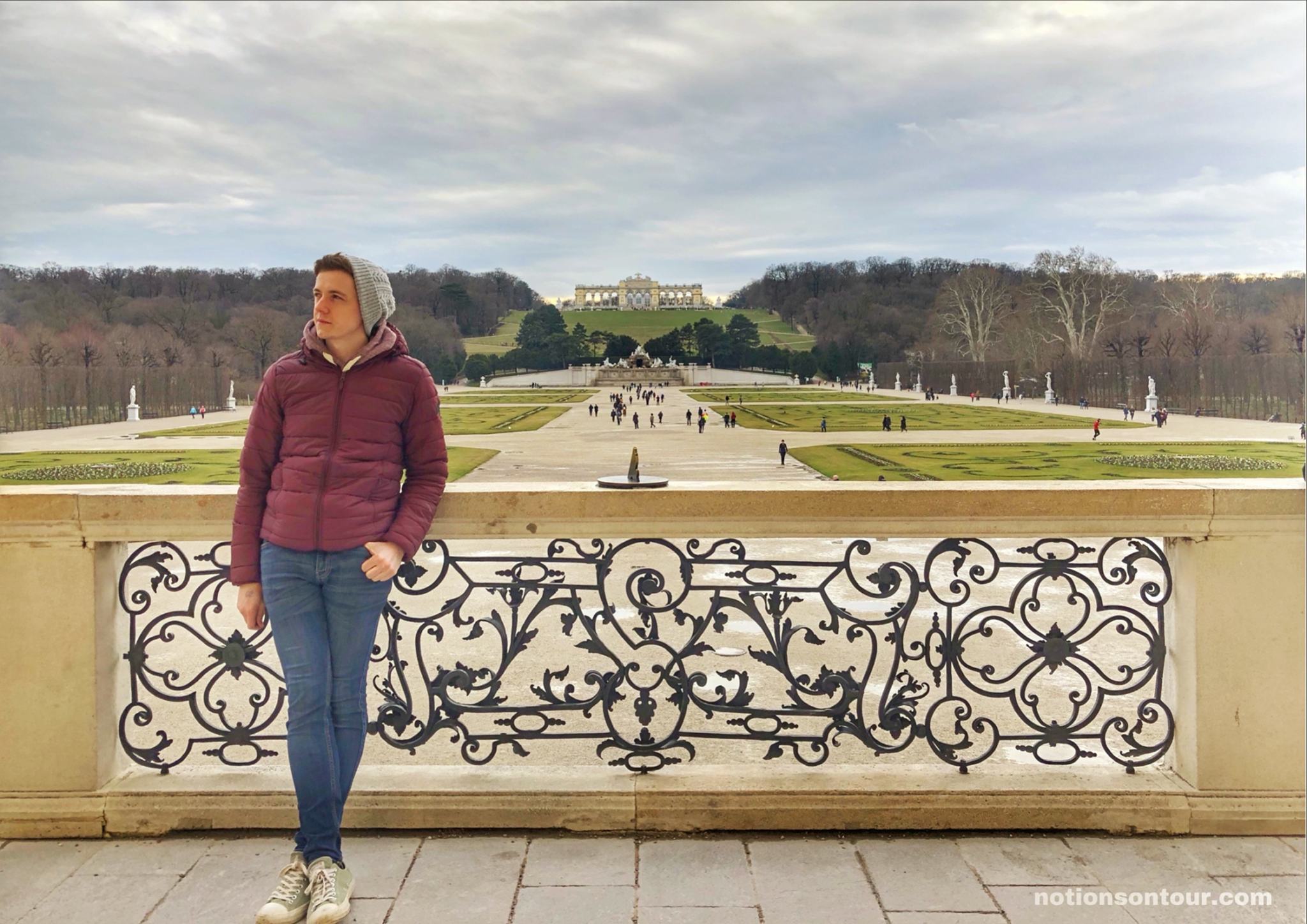 Taking in the Majesty of the Schonbrunn Palace, Vienna, Austria
Notiony Experience
·01/04/2019

The complete guide to the opulent, historic and totally surprising Schonbrunn Palace in Vienna

The Schönbrunn Palace (Schloss Schönbrunn) was once the Summer Palace of the Austrian Imperial Family. The Habsburgs ruled over the Austrian Empire for about eight centuries until the abolition of the Imperial Family on 11th November 1918. The Schönbrunn has almost 1500 rooms and the State Rooms, along with so much more, are open to visitors. Beware though, some sections, such as the Orangery, are only open from April until October.

Everything combined can end up costing a pretty penny. Everything has a seperate ticket entry system, including the State Rooms, the Gloriette, the Zoo and the train around the grounds. BUT if you have the Vienna Pass, almost everything is included! You will need to collect a separate ticket at the main entrance to get into the State Rooms.

The Schönbrunn is also quite easy to get to! Most Hop-On-Hop-Off Buses will stop near the main entrance. You can also get the Underground to either the Schönbrunn or Hietzing stops. It takes about 10 minutes from the Innere Stadt to get there.

The Schönbrunn Palace Estate is massive! It’s bigger than the whole of the Principality of Monaco! There is loads to see and do here, so definitely allow a full day in order to do this wondrous place justice! Be warned though, it gets really really busy so arrive early and definitely go to the State Rooms straight away! The day I visited, the queue was halfway down the courtyard at the front of the palace by 11:00 am!

The Grand Tour is definitely the one to go for. It gets you to the maximum amount of rooms, 40 to be exact. The only downside (purely from a blogger’s point of view) is that photos were not allowed inside. Visitors have to settle for taking all this splendour with eyes and memory alone! They are as spectacular as you’d expect and more! The palace was mainly designed under the watchful eye of Empress Maria Theresa in the mid 1700s. The State Rooms have been home to many significant events from the birth and death of Emperor Franz Josef to the signing of the order to abolish the monarchy in 1918 by Emperor Karl. The Great Gallery was also home to the famous meeting of US President John F. Kennedy (JFK) and Soviet Premier Nikita Khrushchev in 1961.

Once you have collected your ticket from the office beside the main entrance to the estate, you will notice that it has an entry time. It is important to adhere to this, as this is a way to ensure there is an even distribution of visitors through the State Rooms. You also are not allowed to bring backpacks or large bags inside and the queue can be long so leave these in your hotel if you can.

This beautiful structure sits atop a 60m high hill in the grounds. Other than the palace itself, it’s easily the most dominant feature of the Schönbrunn Estate. Built in 1775, this was a favourite breakfast location of Empress Maria Theresa. Sadly it was destroyed during World War II, but was quickly restored to its former glory by 1947. It was again restored in 1995 and now includes an observation deck on top of it (free access with the Vienna Pass) and a cafe in the central section.

As you can see, it’s also a wonderful spot to get a few photos, and if the weather is good, chill out and enjoy a cuppa or just absorb the spectacular view!

After the Gloriette, this is probably the best known attraction in the Schönbrunn grounds. I have to say, I love a good zoo, and this one is no exception! It had all of my favourites there! Many were inside as it was a fairly chilly day. The pandas are always a good shout as they’re usually quite playful! The penguin tank was brilliant as it had a section where the water was right up against the glass so you could see them zooming around under water! Very cool! They can move really really fast too! I tried to get a phot as they went by, but this was the best I could get.

The enclosures are brilliant as they give all the animals the opportunity to wander around and get out of the sight of humans if they want to. The only thing I will say about the zoo is that although the paths are interesting and allow you glimpses into some enclosures, the layout is hard to find your way around. It’s also difficult to plot yourself a route around to make sure you see everything.

Apologies again for the lack of photos here too. Again they weren’t permitted. They are allowed in the newly refurbished areas of the Children’s Museum to allow parent’s to get a beautiful photo. The best part? You guessed it! Free entry with the Vienna Pass!

I thought the Children’s Museum was a wonderful idea! They had a royal child’s room restored for the children to see as well as loads of child friendly exhibits about the Imperial Age and daily activities. They were all wonderfully interesting for children (and grown-ups too!). Many were wonderfully visual and tactile. There was even a dress-up station with a mock up of a throne for that perfect photo!

Once again, photos weren’t allowed inside. The Imperial Carriage Museum is a wonderful display of the various forms of Imperial Transport! Again, free entry with the Vienna Pass! There are loads of spectacular carriages as you’d expect. The fanciest was definitely the gold coronation coach! The massive hearse coach was also on display, this carried, among others, the bodies of Emperor Franz Josef and Empress Elisabeth (Sisi). It was used for the final time in 1989 to carry the body of the last Empress of Austria, Empress Zita. The car Emperor Karl tok with him when he went into exile in Switzerland is on display in the section where other, more modern cars of the Habsburg descendants can be seen.

The upstairs section is a gallery of horse portraits and of harnesses and saddles used at that time. One of the most fascinating aspects of this museum was something I hadn’t expected, the Imperial Sleds! It never clicked with me that sleds would’ve been used as a form of transport before the era

roads and grit! The Imperial Sleds were smaller than the carriages, but no less beautiful looking! They had everything from sleds used for transport to racing sleds!

Die Palmenhaus (The Palm House) is a beautiful large greenhouse in the grounds. It’s the only part of the Schönbrunn that I visited that wasn’t covered by the Vienna Pass. The ticket only cost € 6, which wasn’t too much. It’s a wonderful building with loads of beautiful plants. The main room is huge and has loads of specimens, both tall and not so tall. I’m not even going to try and describe them, I’m no botanist, but I do know they looked very impressive!

While I was there, there was also an event surrounding the sustainable fruit ethos. There was a manned stand where you could hand in a voucher you got upon entry for a cup of fair trade and sustainable tea or coffee along with a selection of sustainably produced fruit! Both were delicious!

Strudel Making at the Schönbrunn?

This was something I didn’t expect to see at all! It’s a cooking demonstration where a bilingual chef demonstrated making a traditional Apple Strudel in a specially designed kitchen! The commentary was given by the chef in both German and English. It even included a sample portion of Strudel to enjoy as you watched the demonstration! Again, you guessed it, free entry with the Vienna Pass!

It lasted about 20 minutes and was quite interesting, even for someone who didn’t know the first thing about Strudel! Be warned though, they do select an audience member to help for a section of it! It’s harmless really, a bit of fun that actually worked quite well. I thought the whole thing was really well done!

As you’ve probably worked out by now, I absolutely LOVED the Schönbrunn Palace! There’s so much to see and do here! I arrived at about 8:15 in the morning and left at nearly 5:00 that evening and I didn’t get to see the whole lot of the gardens properly! The ballet I had tickets to started at 7:00, so I was caught for time as I had to get back to my hotel, get dinner and change my clothes. I could’ve spent another day there!

It is no wonder that it is on the UNESCO World Heritage List! I would’ve loved to have visited the areas that were closed off, such as the Maze and Orangery, as well as experience the Gardens when they are in full bloom. Looks like I’ll have to go back again! It’s clear that the Schönbrunn is the jewel in Vienna’s Imperial Crown, the perfect place to take your Notions on Tour!