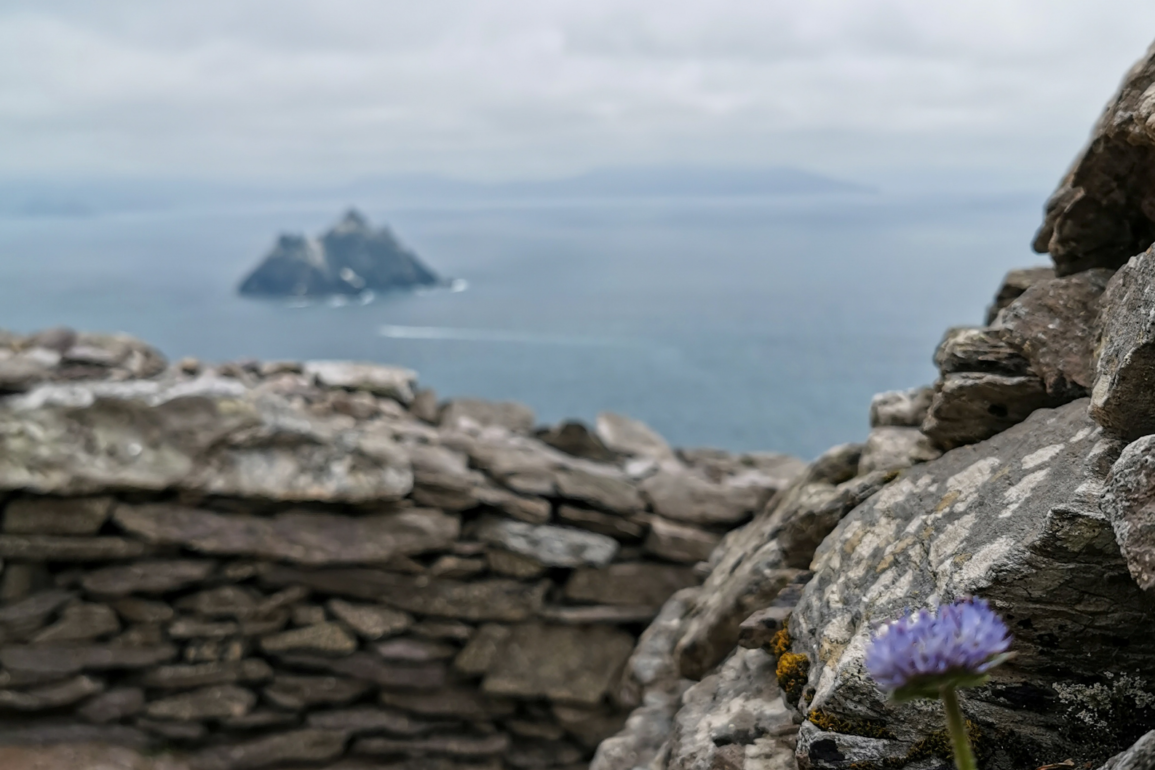 All you need to know about visiting the Stunning Skelligs

The Skelligs are a pair of islands off the coast of Kerry in South-Western Ireland. They boast some of the most breath-taking scenery in the world. The larger island, Skellig Michael, was first inhabited in the 6th Century by an order of reclusive monks. There was a monastic settlement here for approx. 600 years before they relocated to the Kerry coast at Ballinskellig. After the monks, the most famous residents are the thousands of puffins! It is possible to visit Skellig Michael, one of Ireland’s UNESCO World Heritage Sites, but only at certain times of the year.

The second, lesser known Skellig is only (I say “only”) inhabited by a colony of approx. 60,000 gannets! The island isn’t suitable to land on due to the dangerous waters around it and the structure of the island itself.

Skellig Michael is almost 12 km out to sea, so the only way to visit is by boat. There are several operators that will bring you to and from the islands all offering similar packages. I went with Pat Joe Murphy (e-mail me at hello@notionsontour.com) if you wish to get his contact details. When I visited, it cost €100 for the trip. It is still some of the BEST money I’ve ever spent! The island is run by the OPW (Office of Public Works) and they have placed a restriction of 180 visitors per day in order to preserve it as best as they can. The boat operators require a licence to bring people to the island and it is not possible to visit the island outside of these licensed operators.

It takes approximately 45 minutes to an hour (depending on sea conditions) to get to Skellig Michael and a bit longer to return. This is because many operators will bring you to the far side if the island to see the lighthouses and then in close to Skellig Beag to show it to you properly. You typically get about two and a half hours on Skellig Michael, which is more than enough time to enjoy it. Tours generally run from May to October. There are people to meet you on the island to explain safety procedures and to give you loads of information.

Skellig Michael consists of a large number of steps. I counted 618, but I may have missed a few. These steps are generally uneven. They are at different heights relative to each other and are often deeper and shallower than you’d expect. This irregularity is due to their age and the way they were made all those centuries ago. Although they might not look it, they are in good condition, but there are some loose sections too. As a result, it may not be advisable to go out to Skellig Michael if you are unsteady on your feet.

You don’t need to worry too much if you feel you’re not fit enough to climb the steps. There are plenty of opportunities on the ascent and decent to sit and catch your breath. The best advise would be to take your time. It’s also a good idea to bring good walking shoes or hiking boots for climbing the steps, especially if there’s rain.

As the OPW will tell you when you get there, it is highly dangerous to leave the path or steps for any resaon. The ground might look solid, but there are loose stones and in the green ares, plenty of burrows built by the puffins to nest in. Unfortunately, there have been rare cases of death or serious injury when people didn’t follow the advice of the OPW. So ask yourself, is that Insta photo worth your life?

Tips for the Journey Out

The boats all leave from Portmagee at about 8:30 or 9am and will return somewhere around 2pm roughly. This varies on the speed of the boat, sea conditions and the order the boats dock at Skellig Michael. Even if you’re mildly prone to sea sickness, take something to try to prevent it. The last thing you’d want during this unique experience is to feel unwell. Be aware there are no toilet facilities on the island either, so minimise fluid intake before and during the trip.

Trips out to the Skelligs are sometimes cancelled outright if sea conditions or the weather is too bad. The reason can sometime be that it’s unsafe to bring the boats close enough to Skellig Michael to allow visitors to disembark. It can also be dangerous to ascend the ancient steps that are virtually unchanged since they were hewn by the monks almost 1500 years ago.

The History of Skellig Michael

The Era of the Monks

As I’ve already said, Skellig Michael was first inhabited by an order of monks in approximately 600 AD, less than 200 years after Christianity arrived in Ireland. They worked to build a monastery on the island until about 1200 AD. Around this time, the monks moved from Skellig Michael to Ballinskellig on the mainland. They developed three sets of staircases, hewn from the rock to reach the plateau area called Christ’s Saddle. The stairs are on three different sides of the island. This meant that docking a boat would be possible in all but the most extreme weather conditions. They are still in working order today! The only damage inflicted to them was to one set that was partially destroyed in the 1800s when the first of the lighthouses was being built on the Western side of Skellig Michael.

The Monks’ Lives on Skellig Michael

The monks lived relatively peaceful lives of prayer here for 600 years. They did face occasional raids from Vikings, but once the Vikings learned that there were no precious metals in the monastery here, the raids became less frequent. The monks lived in the beehive huts near the top of the Northern peak of Skellig Michael. They, like the steps, have had only very minor repairs since they were first built. The monks survived by collecting rainwater to drink using an ingenious cistern system in the monastery.

There are three types of beehive hut. The sleeper cells were the smaller ones and typically housed three to four monks each. They prepared meals and often ate in the next biggest hut, the refectory. The biggest one, complete with a window too, was their church. There was another church built in the 1100s with mortar made on the nearby Valentia Island, but this hasn’t survived as well as it’s older counterpart.

The monks also buried their dead here too, as you can see below. They were also well able to grow vegetables out there thanks to the incredibly rich soil. This soil was (and still is!) predominantly made of the droppings from the birds that call the island home. The monks also cooked and ate some of the birds, as well as catching fish in the sea. The monastery itself is situated on the Northern peak of the island. As if it was secluded enough out there, they also put a Hermitage on the Southern peak!

After the monks left, Skellig Michael it lay pretty much abandoned for about 400 years, with the exception of smugglers using it to hide their goods. In the early 1800s it was decided to put a light on the island for navigation purposes. By 1826, there were two lighthouses built, along with some paths, etc for access. The monastery and hermitage were undamaged, but a section of one of the sets of steps was destroyed. In 1880, the Office of Public Works purchased the island from it’s then owners, the Commissioners of Irish Lights, with the exception of the lighthouses. It remains in their ownership today.

In much more recent years, Skellig Michael has skyrocketed in popularity due to the presence of one Luke Skywalker. It features in three Star Wars films as Luke’s remote hideaway (Episode VII: The Force Awakens, Episode VIII: The Last Jedi and Episode IX: The Rise of Skywalker). During the filming, no alteration to the island was permitted to protect the history, geology and ecology of the island. With the exception of a few CGI explosions or creatures, Skellig Michael is as you see it on screen. The massive amounts of puffins that call the island home were the inspiration for the adorable “Porgs” that feature in the films too!

Nature on the Skelligs

The flora and fauna that call the Skelligs home strike a balance. This is very evident when you visit Skellig Michael in particular. As I’ve already said, there is one of the world’s biggest gannet colonies with about 60,000 birds on Skellig Beag.

Like Skellig Beag, Skellig Michael has it’s own sizeable bird population, though not on the same scale. This obviously means that the birds generate a substantial amount of waste. This settles on the flatter areas and the seeds of some plants that the birds ingested elsewhere are propagated in the highly fertile “soil”. There are a few gannets there too, along with peregrine falcons, guillemots and of course the famous puffins!

The puffins only spend a few months on the island. So if you wish to visit, go before July as they tend to leave around then. By pure chance, I visited at the end of June and there was a perfect mix of summer wild flowers in bloom and an abundance of puffins that weren’t a bit shy! Watch out for their poo though. Not only is it everywhere, it’s not uncommon for it to land on unsuspecting visitors!

How I Felt After Leaving Skellig Michael

Ever since my visit, I am in awe of the Skelligs. You can really immerse yourself in the history of the island. It’s possible to enter the cells, walk in the monks’ garden, climb the steps, look out over the Atlantic, hear the waves and birds and know that these are pretty much exactly the same things the monks would’ve seen and heard 1500 years ago. Even if you’re not into history, the unique ecology of the island and the stunning scenery will take your breath away. The puffins aren’t a bit shy, none of the photos I took were zoomed in. You can actually get that close to them!

When you look at the scenery around you and out to Skellig Beag, you can really see why the producers of Star Wars felt they didn’t need to change it with CGI in the editing process. You can also appreciate why this place has captured the imagination of generation after generation.

I can honestly say, this is one of the best experiences I have ever had and is possibly some of the best scenery I’ve seen anywhere! I’d also like to take this opportunity to thank my long time friend from college, Frank, who accompanied me on this trip and was so patient with me when I was getting photos and of course thanks to him for taking some of them too! Thanks too to Ciaran who sorted us for accommodation on Valentia island while we were there.