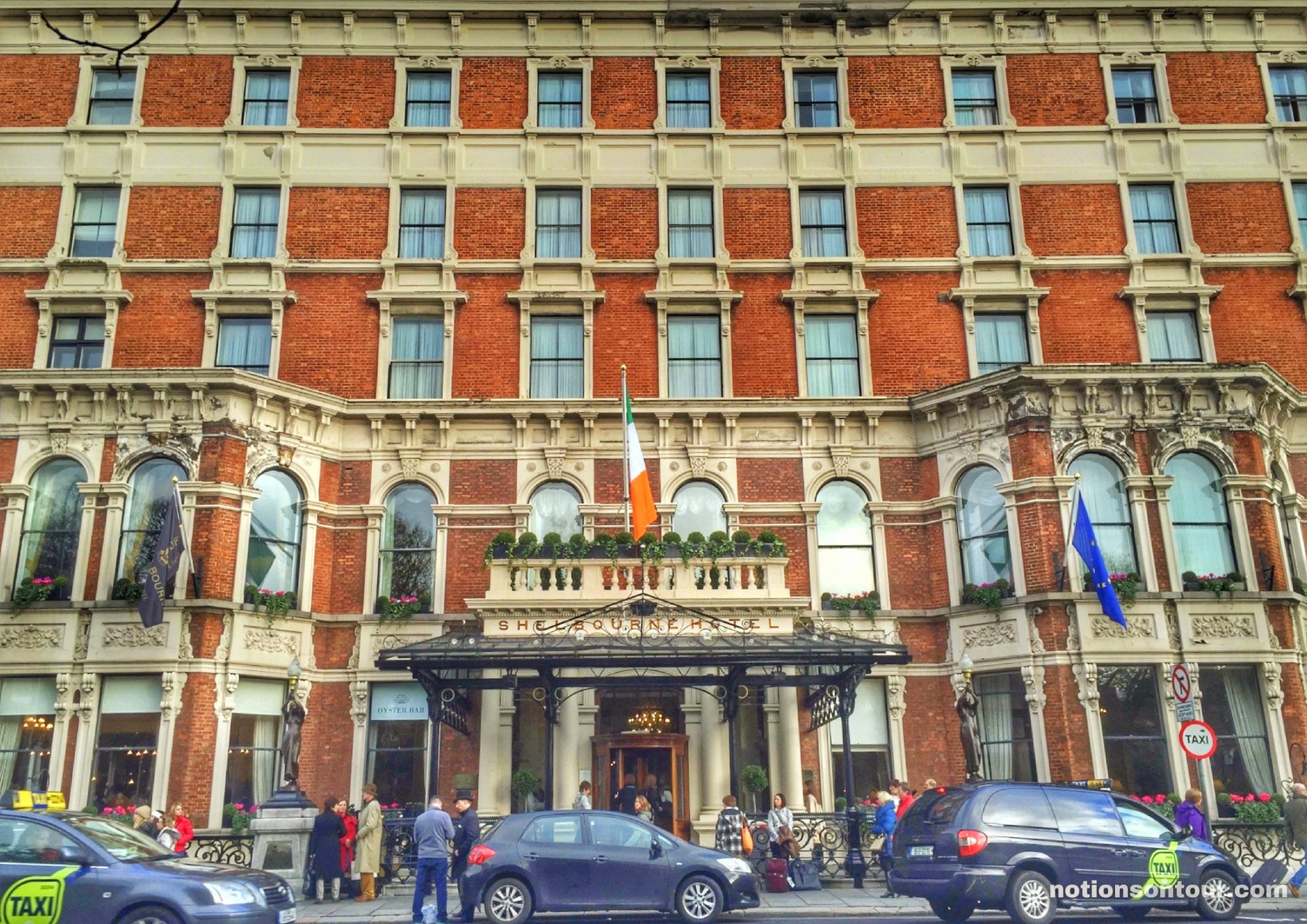 Ever wondered what it's like to stay in one of Ireland's top hotels?

A little while back I had the pleasure to stay in the famous Shelbourne Hotel in Dublin. It was a special occasion that I was celebrating so I wanted to splash out! We arrived outside the hotel and were met by a valet who unloaded the luggage and took the car (this is the only way you can park your car with the hotel).

The doorman let us inside. What awaited us was an entrance hall is as spectacular as you might expect with shining marble and polished surfaces everywhere! It was narrower than you might expect with a lovely stira galánta (notions-y staircase), as my mother would call it.  There was even a beautiful flower arrangement on a side table! The luggage was then brought up to the room by the wonderfully attentive staff.

The room itself was beautiful! Amazingly high ceilings with not one but two windows overlooking St. Stephen’s Green! It was on the second floor, right above the room the Constitution of the Irish Free State was written in back in 1922 by, among others, Michael Collins.

Some of the History of The Shelbourne

The hotel has a huge historical side too. They’ve even published a book about it! The most notable event, other than the writing of the constitution in 1922, was that during the 1916 Easter Rising. The hotel remained open for business serving the gentry and wealthy of the day. Many of these well healed people were shocked to see one of their number, the amazing woman that was Countess Constance Markievicz (née Gore-Booth) leading a band of rebels in St. Stephen’s Green. She went on to occupy the Royal College of Surgeons building diagonally across the Green and later had a gun battle with British Soldiers who were occupying the Shelbourne Hotel itself!

Back to the room… It was very opulently furnished as you’d expect and the bathroom was huge with marble everywhere! The separate shower was so big you could’ve nearly held a country dance in it! The bed was massive too and it looked like the housekeeping staff had literally ironed the bedclothes after the bed was made. Not even the thought of an unauthorised wrinkle in sight! Look!

I had arranged a few extra surprises too, for which the hotel staff were very helpful. Upon arrival they had a rose and card left and two amazing desserts waiting for us!

Mount Falcon – The Hotel You Won’t Want to Leave!

The breakfasts were as good as you’d expect and the Shelbourne Pancakes were particularly tasty! We ate dinner there on the second night in the restaurant. I had the tasting menu, which was themed to have seven courses, each an original recipe from a different era of the hotel’s long history! Highly recommended! I literally rolled out of the restaurant after it, and every mouthful was as good as the last!

Although quite expensive, staying in the Shelbourne is something that I feel everyone should do at least once. You will get service that is beyond compare, food that is like something created by a divine being and a beautifully decorated surrounding in which to experience it all, spend time and soak up the atmosphere! Plus, if you want to have a few notions, it’s definitely the place to come!

I love finding beautiful, unique and luxurious hotels to stay in, particularly in Ireland! If you enjoyed hearing all about the Shelbourne Hotel, have a read of what it’s like to stay at the world famous Mount Falcon!