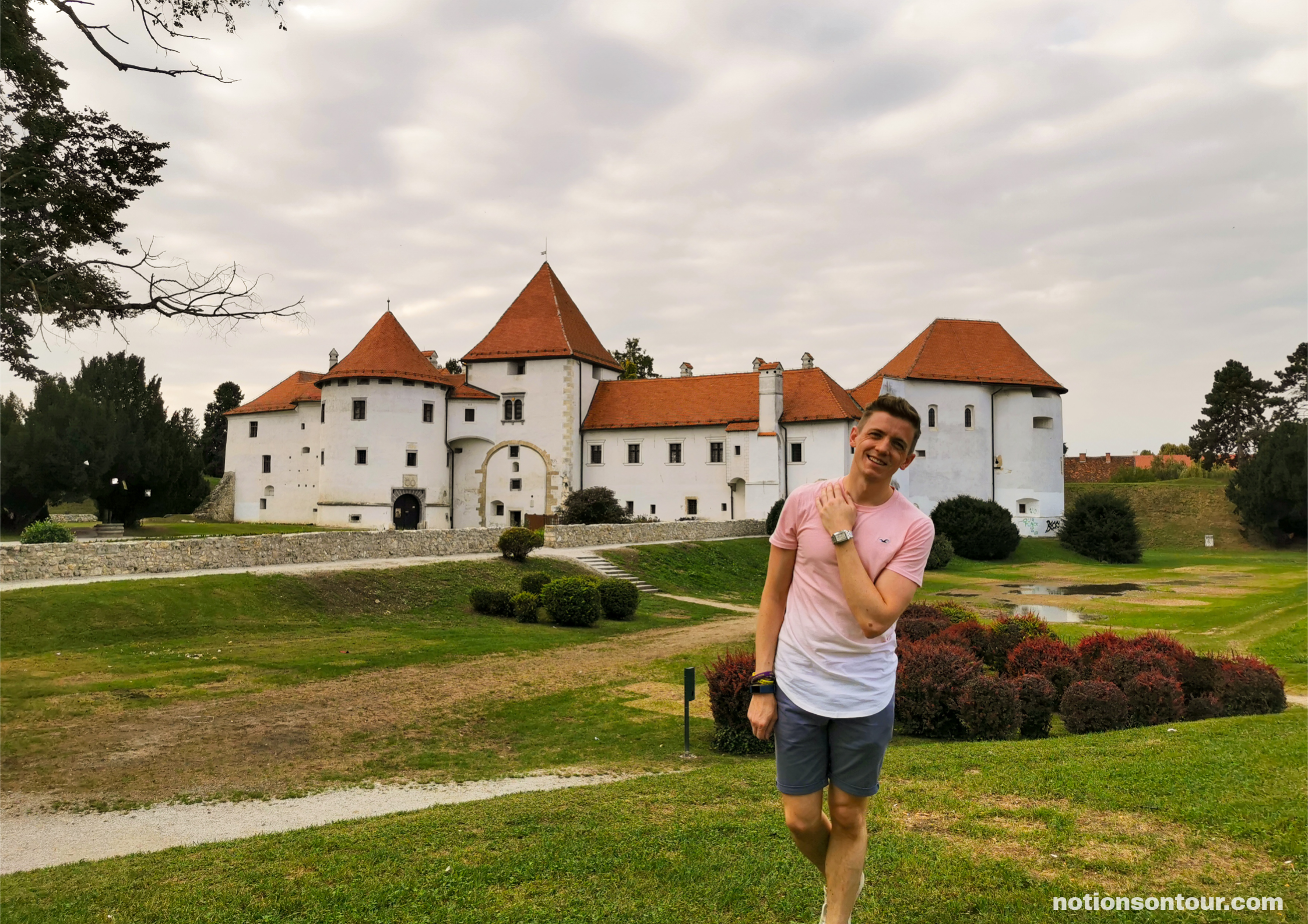 Trakoscan Castle dates from the 13th century. It was built to replace an earlier fortification on the same site. The name “Trakoscan” in semantic form “Trako-stjan” means Dragon Rock, which is fairly cool. You can almost picture a massive dragon atop the hill where, to me, it’d look quite at home!

As far as owners of this beautiful building and the surrounding estate are concerned, the history has been less than steady. Originally, the castle was owned by the Count of Celje and was passed down through the generations until the family became extinct at the end of the 15th century. The property was then divided and it remained so until the Habsburg King Maximilian gifted the castle to Juraj Draskovic in 1584 and later allowed successive generations to inherit it too. The estate, however, was maintained by the state from 1566 and remains so to this day (even if borders and ruling nations have changed).

The Draskovic family occupied the castle from the 1500s right up until they were forced to emigrate to Austria in 1944 – give or take a few decades when they abandoned the castle due to trends in the 18th century. They did return in the 19th century when they renovated the castle to the neo-Gothic masterpiece that you see today. The family also undertook an extensive renovation of the grounds, including construction of an artificial lake. After their departure, the castle was nationalised. The museum here was established in 1954 and has been in operation since. Entry to the grounds and castle (complete with complimentary audioguide in Croatian or English) will cost 40 Kuna (approx €5) which is an absolute bargain!

Firstly, photographs are not permitted inside the building itself. Trust me though, this is a truly magnificent building in every respect. Although it has changed several times in its history, it feels like rooms in the castle got so far and then never changed again. The curators manage to perfectly capture the essence of the history of such a place quite well. Rooms full of suits of armour are common place as well as those done in later styles such as the music room (my personal favourite) that is beautifully decorated to resemble the neo-Gothic fashion that swept the Austro-Hungarian Empire in the 19th century.

There are four floors of rooms to discover as well as this charming little courtyard, which I was allowed to photograph. Everywhere you went there was extensive wood panelling and the feeling that the place was still a strong fortress with an elegant interior.

As you can see, the views from sections of the castle are commanding! They stretch for miles and miles over hills, forests and lakes. You could easily stand and drink them in for hours on end. This brings me neatly on to the grounds themselves.

Trakoscan Castle sits atop a hill that some may choose to take thier time ascending. The path to the castle winds more than you think, but believe me, it’s necessary! The staff are more than happy to assist visitors with mobility issues to access the castle. There is a shuttle service in operation upon request.

The manmade lake that adjoins the castle is huge and is surrounded by beautifully well tended forests and green areas. You can even rent a boat and enjoy it up close or sit in the lakeside bar and refresh yourself while you enjoy the sights. There is a huge network of walks through the grounds and if so desired, it is possible to get a grounds only ticket for 5 Kuna.

As far as I’m concerned, there is only one downside to Trakoscan Castle and Grounds. There is no direct public transport link to it from Zagreb. Some tours may operate, depending on the time of the year you visit. It is possible to get there via the town of Varazdin, but it can take hours. I was lucky that I had my rental car. By road, it’s a little over an hour from Zagreb, but totally worth the journey!

Stari Grad Varazdin is a medieval fortress in the town of Varazdin. It dates from the 12th Century and oozes the Central European medieval charm. The castle itself is accessed by a real, no fooling drawbridge!

The castle itself is surrounded by a moat that has now pretty much dried out. As you can see below, the moat was surrounded by further fortification, large ramparts with steep slopes on either side. This site was chosen because it marks the intersection of major, ancient roads, near the River Drava and was of significant strategic importance as a result. The castle, as it stands today, dates from the 16th century when it was renovated by Toma Erdody, who had been granted it by the Habsburg King Rudolph II. It remained in the family’s possession until 1925 when it was bought by the town. Today, it houses the city’s museum. It contains a beautiful three tiered courtyard in the centre that is worth a look in itself!

Varazdin and the Stari Grad were of such strategic importance that they became a stronghold and residence of choice, for Croatian generals when the Turks and the Ottoman Empire were a very real threat. This strength was so significant that the town was made the Croatian capital in 1767! However… After a massive fire in Varazdin in 1776, the Croatian Ban (Viceroy) moved the capital to Zagreb, where it remains to this day.

My Feelings on Varazdin

Although not as conventionally splendid as Trakoscan, Stari Grad Varazdin is worth a visit to soak up the stoic history of the building and for the extensive museum it houses. The surrounding old town is also stunningly beautiful and I regret not allowing myself more time to explore it properly. If you don’t have a car, there is a direct bus to travel the 81km from Zagreb to Varazdin. If you’re visiting Zagreb, I highly recommend doing so as a day trip. In case you need more convincing, the town is very much in the running to be included on the UNESCO World Heritage Site list, so the place is looking at it’s best!