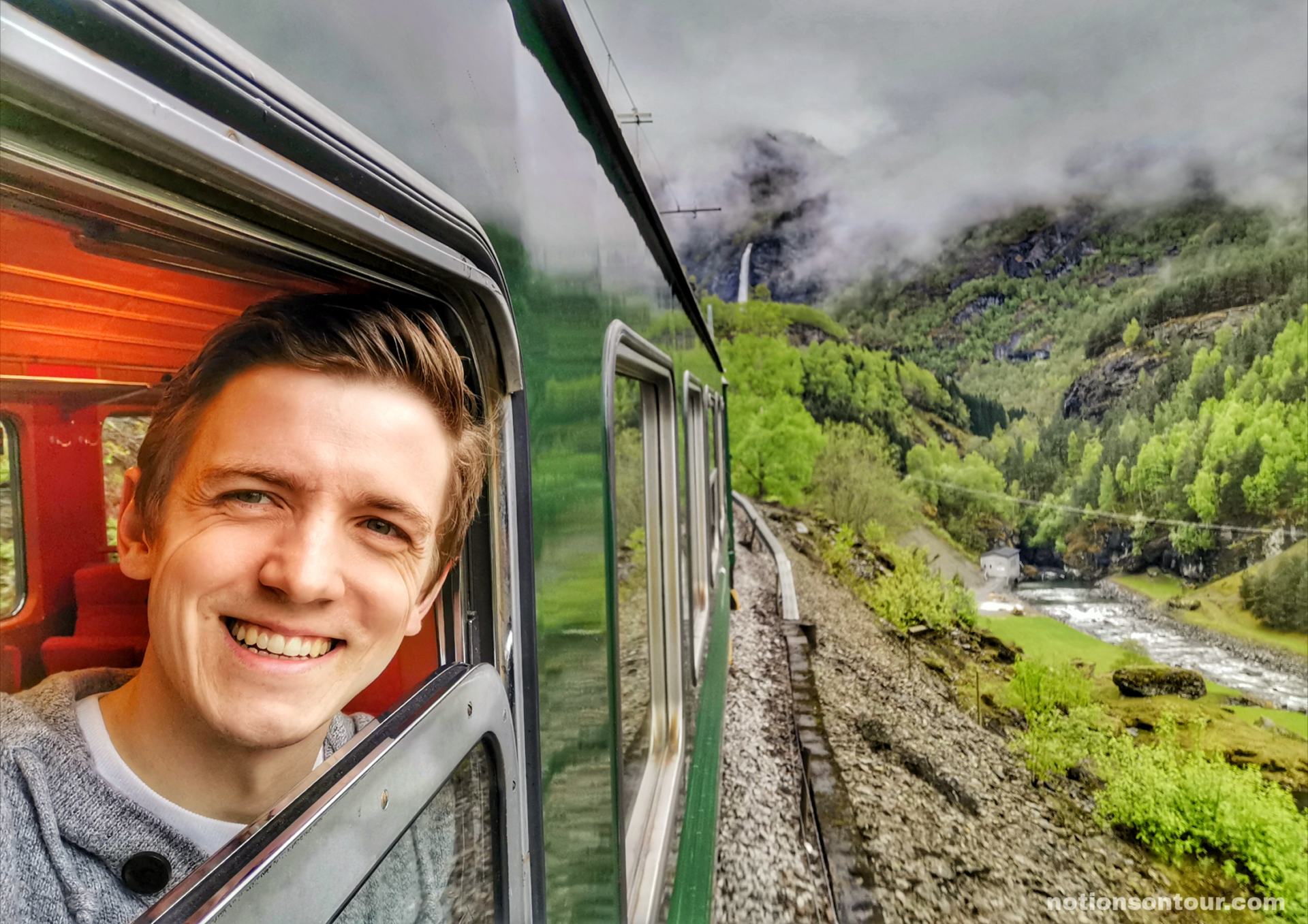 The BEST train journey in the world!

The Flåmsbana is possibly the most popular attraction in the greater Flåm/Aurlandsfjord area. It was the first thing that drew my attention to the area and is a large part of why I chose to visit Flåm. But what is it? Well, it’s essentially a train journey. I get that this might not sound very fun or flashy, but it has been consistently listed among the best train journeys, not just in Europe, but in the world!

You can go about travelling on it in a few ways. As far as a visitor to the area is concerned there are two main options. The first, and by far the most popular of these is to do a return journey from Flåm to Myrdal and back to Flåm. This costs 440 NOK (approx. € 46/£ 41/$ 52). It sounds expensive, but I can assure you, it is worth every bit! The other option is if you are travelling between Oslo and Bergen by train, you can alight in Myrdal and board there. If you do this, be aware that there is nowhere in Flåm that you can rent a car for onward travel. You can’t simply drive to Myrdal either as it is only accessible by train.

The entire return journey takes about two and a half hours. It’s a little over an hour in each direction and there’s about a 15 minute stop in Myrdal. No matter where you sit, you’ll get an amazing view! If I did have to choose though I would sit on the right hand side of the train. I think the view on that side just pips those on the left to the post. Some seat also have windows that can open, so if you want to take photos, these will allow you to do so without glare. Don’t fret if you miss them on the way up to Myrdal, because you can always get them on the way back down.

If you do have any preference for a seat, you should arrive earlier than your ticket time as seats are not assigned. The staff are exceptionally helpful and they will help with any specific requirements you might have. I would also strongly recommend booking in advance. There are loads of carriages, but it has been known to sell out!

The History of the Flåmsbana

The Flåmsbana is just over 20km long. Construction on it started in 1924 and it didn’t open to the public until 1940! There was naturally huge work involved in building it and from the train you can see some of the access roads that both preceded it and those that were built to allow for the construction.

The line was orignially built to give access for the people (and freight) in the Flåm region to the Oslo to Bergen train line, but now it is almost exclusively a tourist train. The line was electrified in 1944 and save for a section in the middle to allow trains to pass each other, it is a single line from top to bottom.

All of this, and more is detailed in the free Museum on the railway in Flåm.

Is it Only a Bit of a Train Ride?

Well, yes and no. As far as activity levels are concerned, yes, you only need to sit in a train and look out the window. You won’t be bored though with the spectacular views that will greet you!

There is a short stop near Myrdal to take in the Kjosfossen. It’s a beautiful waterfall with a walk way beside the platform so you can take it all in. If you’re lucky, you might even be greeted by the mysterious Huldra creatures from Norse Mythology. They are said to frequent the waterfall in the summer months…

The train starts in Flåm, which is essentially at sea level and climbs up to the eye watering, 867m to Myrdal. To put that in proportion, it’s 39m higher than the 828m Burj Khlaifa (the world’s tallest building) in Dubai! I have to admit though, you actually don’t really feel the climb! (Or at least I didn’t anyway…).

If you like, when you are booking your ticket, you can take the train up and rent a bicycle and cycle back to the bottom. You can hike it too! If you’re feeling exceptionally energetic, you can even do this in reverse! You can also get a ticket that includes a light lunch and longer stop off in Mydral.

I will be the first to admit that when I booked it, I felt it was quite expensive. Now, having done it, I can honestly say, it is totally worth the money! It is not only an incredibly scenic journey, but it’s quite relaxing too! It’s the perfect way to feel totally absorbed in the Norwegian fjords and countryside without exerting loads of energy. It’s easy to see why it is Norway’s third most popular tourist attraction!