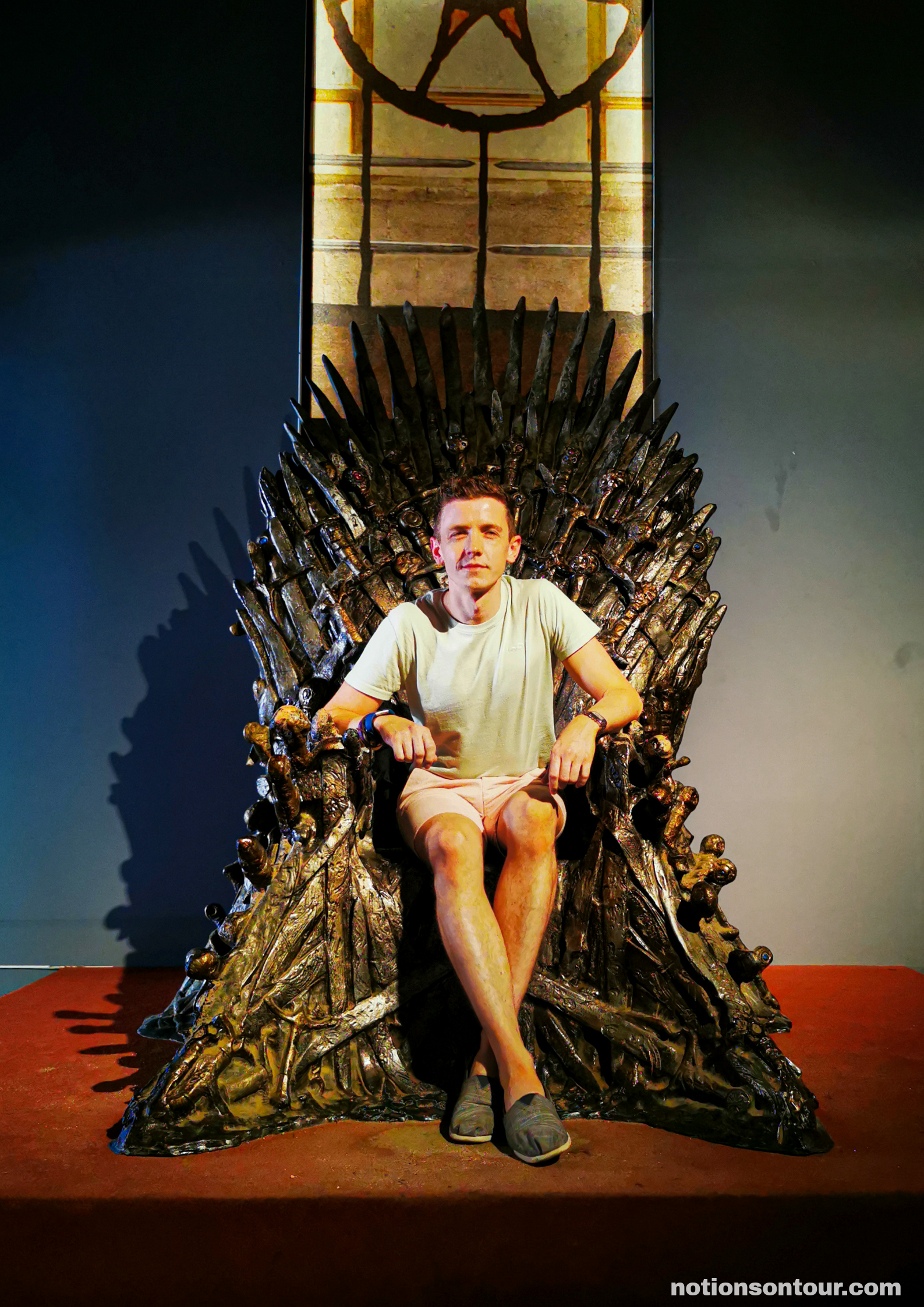 The Best Game of Thrones Locations in Dubrovnik

Before you start reading, be aware that this post about Game of Thrones locations is “dark and full of (spoilers)”.

These days, Dubrovnik’s old city has grown exponentially in popularity due to one thing, Game of Thrones. Loads of different parts of the old city and it’s immediate surroundings were used as locations for one of the most popular TV programmes of all time! The locations I’m going to tell you about are all easy walking distance from each other. Best of all, it’ll mean you can see all these places (at your own pace) for free! The only exception is accessing the city walls and accessing Lovrijenac (St. Lawrence’s Fort). You can access the Walls for free (with the Dubrovnik Card – read more about it here). You can also buy a ticket that covers the Walls and Lovrijenac from €37.50.

The Walls of Dubrovnik

What better place to start than the famous Walls of Dubrovnik! Principally accessed from either the Pile or Polce Gates, the Walls feature several times throughout the series. Most notably, you’ll spot them in Season 2 when Varys and Tyrion are discussing the defence of King’s Landing from Stannis’ fleet. Although you can’t readily access this area of the Walls (Fort Bokar), you can clearly see it from other angles. The only modification was the addition of the CGI Red Keep in the background.

The Walls not only feature significantly in Game of Thrones, they are also a great place to see some of the other locations. They include Fort Lovrijenac, which doubled as the Red Keep in King’s Landing, the Dubrovnik West Pier that features extensively too. You may recognise like the bell tower from the burning of King’s Landing by Danaerys and Drogon. The bells were to signify the surrender of the city to the Targaryen forces. I say supposed to. We all know what happened there.

Fort Minceta – The House of the Undying

The most prominent part of the Walls of Dubrovnik is the large round tower on the North-West corner of the historic walls. This tower is Fort Minčeta. You’ll recognise it’s base as the House of the Undying in Qarth. This is where Qarth’s warlocks hid Danaerys’ dragons from her. The scene, in Season 2, Episode 10, is the one where Danaerys started circling the tower looking for an entrance, pursued by Ser Jorah. She then disappears into the tower, drawn in by the magic of the warlocks (or maybe her own magic, drawing her to her dragons?).

There are three entry points into the Old City of Dubrovnik and the busiest of them is the Pile Gate. That doesn’t stop you stepping back into the far corner of the area between the two parts of the gate to admire the section of King’s Landing where Joffrey, Cersei, Sansa and many other characters on returning from sending Myrcella off to Dorne in Season 2, Episode 6. They were attacked by a mob with piles (ironically) of manure. Then Joffrey orders the soldiers to attack the crowd. More observant fans will notice that the outer section of the Pile Gate features again when Jaime Lannister returns to King’s Landing in Season 3 Episode 10.

The other main entrance into the Walled City is the Polce Gate. Aside from being used as a location for Game of Thrones, is an exceptionally pretty part of the city and it features regularly throughout. You can see a section of it when Cersei is finishing her Walk of Shame (one of the most powerful scenes in all eight seasons) in Season 5 Episode 10.

Just inside the Polce Gate is the city’s Dominican Monestary. It has a very distinctive set of circular steps leading up to its door. You’ll notice these in Season 2, Episode 5 during a protest speech against the Lannisters.

Game of Thrones Locations You Can See from Fort Lovrijenac

Fort Lovrijenac (St. Lawrence’s Fort) has one of the highest concentrations of Game of Thrones locations in Dubrovnik! When it comes to these filming locations, Fort Lovrijenac has rightly earned the nickmane of “The Red Keep”. It overlooks Dubrovnik’s West Harbour, another haven for Game of Thrones fans. Access to the Fort is included on your ticket for the City Walls and on the Dubrovnik Card.

From the Fort, you can clearly see the areas of the harbour that doubled as the shores of Blackwater Bay (A) and King’s Landing’s Harbour (B). You also get a wonderful view of Fort Bokar (a section of the City Walls) and the sea edge of Dubrovnik’s Walls. From the pier below you can clearly see that the only addition made by CGI for the series was the addition of the Red Keep Castle.

Anyway, back to the Fort itself. Here, you can see the location for the Joffrey’s Nameday fights from Season 2, Episode 4. You know, the episode where Tyrion arrives back to King’s Landing and Joffrey force-feeds Ser Dontas wine in an attempt to kill him.

A location for a more famous scene is hidden just inside the Fort’s entrance. It’s the one between Cersei and Littlefinger where they demonstrate what power is in Season 2, “Knowledge isn’t power, power is power”. If you wish, you can even rent it as a (not Red) wedding venue for about €4000 for the day. (Is that good value? I genuinely have no idea!).

As you can see from an earlier photo, Dubrovnik West Harbour is a stunning place, even if it had nothing to do with Game of Thrones! The shingly area close to the Walls of Dubrovnik, from which you can embark on a kayak tour, was used several times throughout the series. The kayaks actually had to be all rented out for each day that they filmed there! They filmed the battle scene, in Season 2, Episode 9, between the Lannister forces and Stannis’ fleet here. It was the one where a King’s Guard knight gives Tyrion his distinctive facial scar before being killed by Pod. This area was also used for Myrcella’s send off to Dorne in Season 2, Episode 6, and it’s where Cersei waits for her return in Season 6.

More beautiful again is the pier itself. From it, you can see a series of steps and coloured doors in the direction of Fort Lovrijenac. This is where the Gold Cloaks, under Cersei’s command, murdered some of King Robert’s illegitimate children in Season 2. As you can see, little or no changes were made to the area for filming!

The pier itself, with the formations of rock will be instantly recognisable to any Game of Thrones fan. So so many major scenes were filmed here. The first of these was when Shae watched over Sansa speaking to Littlefinger in Season 3, Episode 1. They also shot the poignant parting of Jon, Sansa, Arya and Bran in the final episode (if you could see through the tears when watching it – both for the poignancy and for the rushed nature of that final Season (#JusticeForDaenerys!)).

On the opposite side of Fort Lovrijenac lies Gradac Park. It was here, that Joffrey’s wedding to Margaery Tyrell, more commonly known as “The Purple Wedding” took place. It was the one, in Season 4, where Lady Olenna Tyrell poisoned Joffrey and the series’ first proper baddie met his end. Although we don’t find out the culprit until Season 6! Chances are, you might not recognise it, due to the large amount of set and props used. But as you start to spend time in the section closest to Fort Lovrijenac, parts of it will start to look familiar, especially to the more eagle-eyed fans.

The Rector was the title of the ruler of the Republic of Ragusa from the 14th Century until 1808. Dubrovnik formed part of this republic. Built in the mid 1400s, the Rector’s Palace served as the Rector’s (Leader’s) “seat” until Napoleon conquered Ragusa in 1808. Since 1872, it has served as the History Department of the Museum of Dubrovnik. As well as being a fascinating museum, the staircase in the building’s atrium (built after a huge earthquake severely damaged the building in 1667), is a thing of beauty. This staircase was used to film the scene where Qarth’s Spice King, a member of the Thirteen, refused to give Daenerys ships to sail to Westeros during Season 2. This short scene took several days to film, which gives you an appreciation fo the sheer amount of work involved!

On this stunning set of steps on Ulica Uz Jezuite, in the heart of the Old City of Dubrovnik, one of the most famous and most powerful scenes, not just of Game of Thrones, but of any TV Series, was filmed. This is where Cersei’s Walk of Shame began. This powerful scene made me personally feel for one of the most ruthless characters TV has ever seen! (Huge huge praise for Lena Headey and her phenomenal performance through the whole series). The scene was also really expensive to film! They had to pay all the businesses along the street full daily earnings. What’s more, everyone who lives on the street were paid not to look out their windows during filming as a privacy gurantee! If you miss this on your trip to Dubrovnik it would be a “Shame, shame, shame *ding ding*! (I’ll let myself out…)

As well as this famous scene, they also used it for other scenes where characters were approaching or leaving the Sept of Baelor in King’s Landing.

Lokrum Island, just offshore, is a blissful paradise with it’s own collection of unique sights. You can hop on a ferry for a short ride out to it from the main pier in the heart of Dubrovnik’s Old City. The main collection of buildings served as a Benedictine Monestary for centuries until the last of the minks left in 1808. Later, in 1859, these buildings welcomed a new occupant. Given the beautiful and peaceful nature of the island, it was no wonder that the Austro-Hungarian Archduke Maximilian Ferdinand of Habsburg (later the short the short lived Emperor Maximilian I of Mexico) built his palatial summer residence here. He bought the island using the dowry funds from his marriage to Charlotte of Mexico. That, believe me, is a whole other story that I won’t get into now.

The buildings then went on to house botanical gardens and that is where things start to get relevant! Although extensively damaged by the bombardment from JNA forces during the Homeland War in the 1990s, the gardens captured the attention of the Game of Thrones location scouts. The inner courtyard became the lavish gardens of Qarth’s powerful Xaro Xhoan Daxos, a member of the Thirteen.

This is the scene where Daenerys was introduced to the rich and powerful citizens of Qarth. Today, one of the buildings adjoining this section of the now largely abandoned palace houses a replica of the Iron Throne. Sure it’d be rude not to have a sit in it!

Don’t forget, “In the Game of Thrones, you win or you die. There is no middle ground”. Dubrovnik certainly won! I hope you enjoy it!