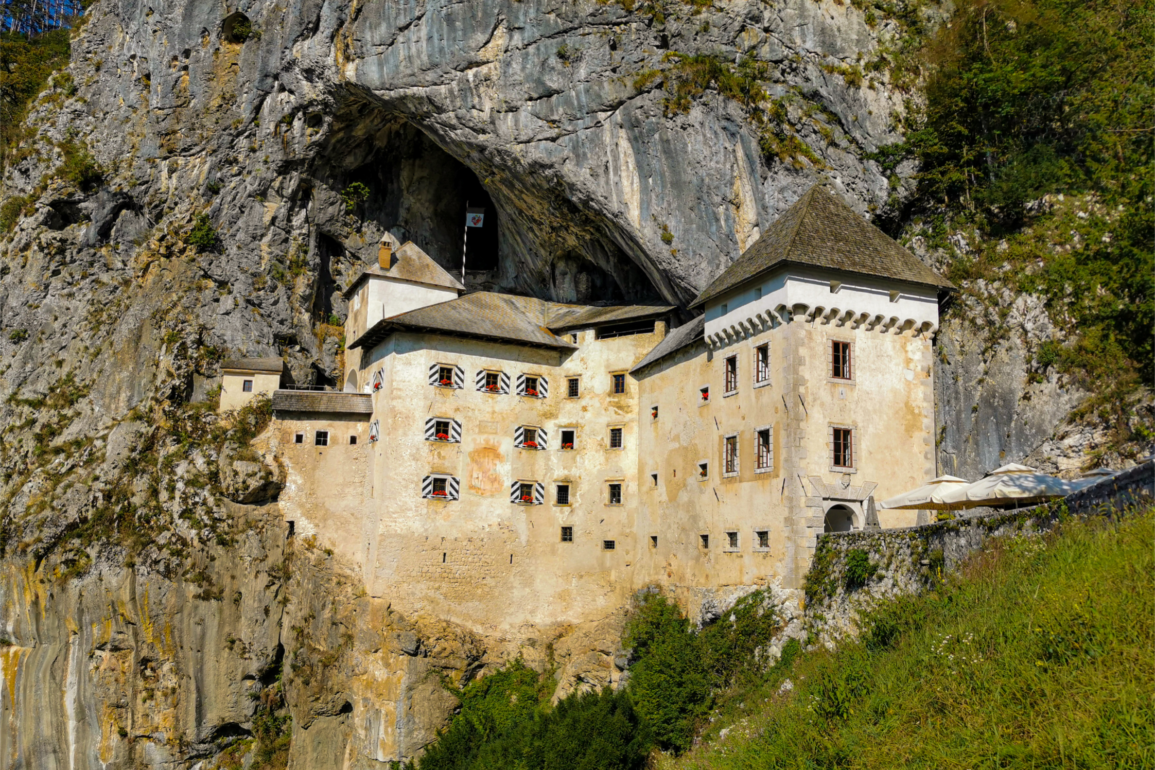 The Beauty of Slovenia’s Caves

The Best of Slovenia's Caves, Postojna, Predjama and Škocjan!

The limestone hiding under the beautiful landscape in Slovenia is the perfect spot for a few caves! Jump in and explore them with me!

The Postojna Caves were first discovered in 1230 AD with a huge area only being discovered in 1818 upon the invention of better lights. There are several chambers named after the rock formations. The Spaghetti chamber is so named because of the large amounts of narrow stalactites hanging from the roof. One chamber has lots of red on the formations within it, caused by iron leeching in through the limestone. It comes as no surprise that this one is known as the Red Chamber! Following on the colour theme, another area is known as the white chamber because of the unadulterated nature of the limestone which leaves a brilliant white colour!

When booking, I chose the Three Cave Trek and the Predjama Castle ticket for €50. This proved to be a brilliant option! Not only does your ticket price include access to the nearby Predjama Castle (see below), but you also get access to a much longer tour that encompasses the Black Cave and Pivka Cave along with the main Postojna Caves. This tour has limited numbers (mine had 7 guests on it) as opposed to well over one hundred on the main tour. You get a much more personal experience! The tour last between two to three hours and an underground train for 2km in each direction with a 5-6km walk!

Where Does the Three Cave Trek Take You?

The tour starts like the others, with a 2km underground train ride that brings you through some beautiful areas, including one called the Ballroom. From there, you break away ahead of the main tour and see the first half of the Postojna Cave. At this point, you truly appreciate the smaller group! From here you divert into an old Italian War tunnel that was built during the World War II when the area was part of Mussolini’s Italy. This leads you into the Black Cave. The black on the walls and formations here originated in a forest fire that occurred 1000s of years ago in the adjoining forest.

At this point, you resurface into the forest briefly for a short hike to the entrance to the Pivka Cave. To enter this one, you need to descend some steps into a large hole. The Pivka Cave boasts an underground river. Because of this, if there has been too much rain, it can be closed off.

The Pivka Cave brings you back into the Black Cave. At this point you head back down the war tunnel into the second half of the Postojna Cave. Just before you hop back onto the train for the return 2km journey, there’s a little treat for you! There’s a tank with some live dragons in it! Okay, maybe not actual dragons… For centuries the cave salamander were thought to be young dragons! Because of the smaller group I was in, I got several brilliant opportunities to see these fascinating creatures up close!

Why Choose the Postojna Caves?

There are several things that make the Postojna Caves unique. Firstly, there’s no restriction on taking photos, other than not using the flash. This is fairly unique in Slovenia, the other big cave network, the Škocjan Caves don’t allow photos in them at all. There are loads and loads of beautiful cave formations! There’s multitudes of stalactites, stalagmites, columns and curtains of varying sizes. The train ride is also really cool, and let’s face it, totally unique! And then there’s the tank of cave salamanders! It is nothing short of amazing to see these creatures up close! If you’re going, aim for an earlier time as it does get really busy and parking can be challenging, even if there is loads of it.

The totally unique and breathtaking Predjama Castle is a quick 10 minute drive from the Postojna Caves and my Three Cave Trek ticket included admission to it. If you want to visit it separately tickets are between €12 and €15 and are most definitely worth it! Predjama Castle is literally built into the side of a cliff!

The History of Predjama Castle

It’s thought that it was first built in the 13th Century. Later, in the 15th Century, the castle hosted it’s most famous resident, Erasmus of Leug. This guy was Slovenia’s answer to Robin Hood! Erasmus had a disagreement with the ruling Habsburg royal family and the monarch, Frederick III, the Austrian and Holy Roman Emperor. So naturally, his army besieged the castle. Unknown to the Habsburg forces, there was (and still is!) a secret tunnel through the mountain that allowed them to keep supplies coming into the castle! It was only when Erasmus was betrayed by a servant that he was killed while on the loo!

Attending the Opera in Vienna

After the siege, the second castle was re-built, only for it to be destroyed by an earthquake! The third castle, however, built in 1570 still stands today! It remained a private home until after World War II when the Yugoslavian authorities turned it into a museum. And what a museum! The rooms have been reconstructed in the medieval style. They are literally built into the rock too. Some rooms have two or three man made walls with the remaining walls being the cliff itself! You can also access the start of the famous tunnel too. Fret not, the route os really well laid out and the free audioguide is very good. There’s also no time restrictions here, so if you want to soak up the views from some of the rooms or terraces, you can!

The Škocjan Caves is the other main cave network in this part of Slovenia. They were added to the UNSECO World Heritage Site list in 1986. Once you enter the main chamber, you can see why! The largest chamber is 146m from the river Reka at the bottom to the roof of the cave! There’s even a section where there’s a bridge over a 45m gap between walkways! Within the cave, you can see different paths or steps that were constructed down the years since the cave was first discovered in antiquity. The bulk of these are from after tourists first stared visiting the caves in 1819.

The cave tours operate in English, Slovenian and Italian and they involve about 1km of a walk above ground to the entrance and about 2km underground. The only downside to these beautiful caves is that there are no photos allowed inside them. This simply means that you need to unplug and take memory photos instead! Visiting these caves is still well worth the €24 price of an adult ticket!

As always, it’s better to either pre-book or arrive early to avoid queues and delays. The caves are always at a constant temperature, irrespective of the weather outside. This is usually about 12ºC. Because of this, it might be best to wear trousers/jeans and to bring a jacket. Be aware also that of there’s been a lot of rain, the rivers can swell hugely and swamp the caves, cutting off some paths. This can be the case, even if the rain fell much further upstream. Naturally, this means that the caves can be closed at short notice. Don’t let this put you off. If you get the opportunity to visit, DO!