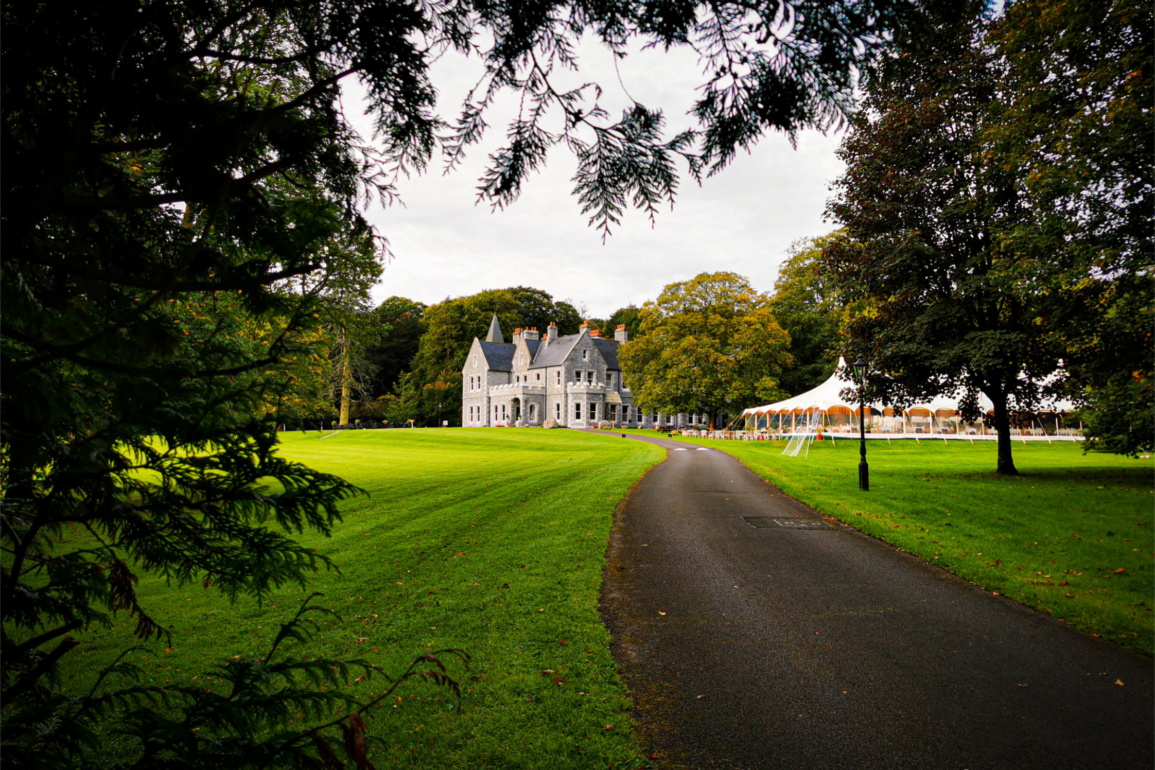 Mount Falcon – The Hotel You Won’t Want to Leave!

The Mount Falcon Estate, a few minutes drive South of Ballina in North Co. Mayo is an absolute haven! Let’s have a little look at all the wonderful things it has to offer!

The Mount Falcon Estate is about 100 acres in size and features the main house/hotel and a number of self-catering units called the Courtyard, Lakeside and Woodland. The original house was built by Ultred Knox for his wife in 1872. It was designed by Franklin Fuller, one of the most notable architects of his time. He is also responsible for the stunning buildings that are, Ashford Castle, Kylemore Abbey and Farmleigh House. In 1932, Mount Falcon was bought by Major and Constance Aldridge who ran it as a shooting and fishing lodge. Constance Aldridge went on to be one of the founders of the Blue Book of country houses. In 2002, the current owners, the Maloneys, bought the Estate and I can tell you from experience, that it feels like they have put their heart and soul into the place! The personal touch and attention to detail is extraordinary!

The main hotel building is a mixture of the original manor house and an extension that the Maloney family built when they bought the Mount Falcon Estate. The bedrooms and suites are divided between the original house and the newer extension. All are beautifully well appointed and very spacious! The beds are really comfy too!

There are some beautiful common rooms in the original section of the hotel! They are all furnished wonderfully and are full of really cosy couches. In a non-Covid era, they’d be overflowing with guests soaking in their surroundings, but with the times that were in it when I visited, this wasn’t possible due to the Covid restrictions that were in place.

I stayed in late September and every time I walked into the main hallway/reception there was a really welcoming roaring turf fire in the beautiful hearth! They also managed to perfectly adhere to all the Covid procedures without them impacting on the beautiful surroundings in the hotel!

The restaurant in Mount Falcon is multi-award winning. Sadly, due to social distancing requirements, they had to close it temporarily. Unfortunately for me, this coincided with my visit. They did however have a large marquee set up close to the hotel in the grounds. They had a wonderful BBQ type meals on offer that were very tasty! It was such a creative and novel way of getting around the Covid restrictions while catering to the needs of all the guests!

For me though, the breakfasts won me over! There were a few wonderful options and the chef made an extraordinary breakfast! I honestly can’t wait to go back when I can experience their culinary delights in full flight!

As I visited in September 2020, it would be remiss of me not to mention Covid. The procedures that Mount Falcon had in place were without fault! I’ve already mentioned some already, but I really do have to compliment them on the precautions they had in place.

When I checked in, I was given a freshly sanitised pen to sign the form. I then put in a specific container for further sanitising before storage. There were rope barriers at reception to ensure adequate social distancing between staff and guest. The tables for breakfast were laid in the function room so that there were two metres or more between tables. They also had only prepacked fare on offer for the breakfast buffet which meant there was no possibility of contamination. Fret not though, there was also a menu of hot food on offer too! I felt TOTALLY safe for the duration of my stay. All the measures were highly reassuring.

There are extensive grounds for some top notch exploring! There’s some wonderful forested areas, not to mention some beautiful lake areas and a driving range! Across the main road (there is an underpass) there is a section of the estate that borders a river. This is the main base for the estate’s angling excursions!

The angling base is right beside the clay pigeon shooting range. I’d never gone shooting before, so I decided that I should give it a go. You know, play the part of the country gentleman! It was actually quite enjoyable! I got clear and concise instruction in how to safely use the shotgun. I opted for the 25 clays and cartridges option which cost €50. I’m delighted to say I hit 12 of them. My instructor told me this was very good for a total novice. I really hope he wasn’t humouring me! Hahaha

As the saying goes, “When in Rome, do as the Romans do”. Therefore it would be a walking disgrace to visit Mount Falcon and not engage in some Falconry! I chose the Hawk Walk which costs €150 per couple (with more participants, the per person cost decreases). The falconer, Martin McPhillips was absolutely phenomenal! By his own admission, he’s a talker. This really added to the whole experience! He is clearly passionate about falconry and his affection for the birds is clear!

The birds of prey that call Mount Falcon home are many and varied! Amongst other birds of prey, they have a snowy owl, a great grey owl and an eurasian eagle owl. Martin was so interesting to listen to. One thing he spoke about was the colour of the owls’ eyes. If an owl has yellow around its pupils, like the great grey owl, then it hunts during the day (diurnal). If, instead of the yellow, there’s orange, like with the eurasian eagle owl, then it hunts twice a day at twilight (crepuscular) and if you can’t see any colour and the eyes are dark brown or black, like the barn owl, it hunts at night (nocturnal).

There were a few birds that were definite highlights. They have an older barn owl, you know, the one on the opening titles for RTÉ’s The Late Late Show. Her name is Luna and she’s beautiful! She doesn’t like being handled by strangers though. They also have a Caribbean barn owl though called Ashley. She looks very similar to Luna, except she has darker plumage. Ashley is also quite content with being handled by strangers.

Another of the highlights was the peregrine falcon, Hugo. At the very start of the Hawk Walk, Martin handed me the falconry glove with Hugo on it, complete with his hood! This was quite the introduction! Fun fact! Peregrine falcons have been used in falconry, the original sport of kings, for over 3000 years! Bonus fun fact! They are also the fastest animal of any kind! Their bodies allow them to dive at 389 km/h!!! Their average horizontal flight speed is a tame (in comparison) 60 – 90km/h!

The stars of the Falconry show, certainly where the Hawk Walk is concerned, are the two female Harris Hawks, Arizona and Phoenix. They love being handled by both experienced falconers and rookies like me! Martin brought me for a walk through some of the forested areas of the estate. I wore the glove the entire time and the hawk would return to it when I held it high enough! Occasionally, Martin had to do a special call for it to return.

At one point, it flew to a higher tree branch to use its exceptional eyesight to detect the movement of its prey. We then stamped around on the ground, as if we were male hawks disturbing the prey. The male hawks would typically do this in the wild and the female would then dive at the prey. Hawks and falcons are, quite interestingly, a matriarchal society!

Watching the hawks hunt, fly and walk around was, quite possibly one of the most amazing experiences I’ve ever had. These creatures are both works of art and the best functioning machines imaginable! Nature has honed them through centuries and millennia of evolution to be the breathtaking apex predators they are today. My visit to Mount Falcon has left a number of impressions on me. Chief among them is that I want to be a falconer when I grow up!

I love finding beautiful, unique and luxurious hotels to stay in, particularly in Ireland! If you enjoyed hearing all about Mount Falcon, have a read of what it’s like to stay at the world famous Shelbourne Hotel!