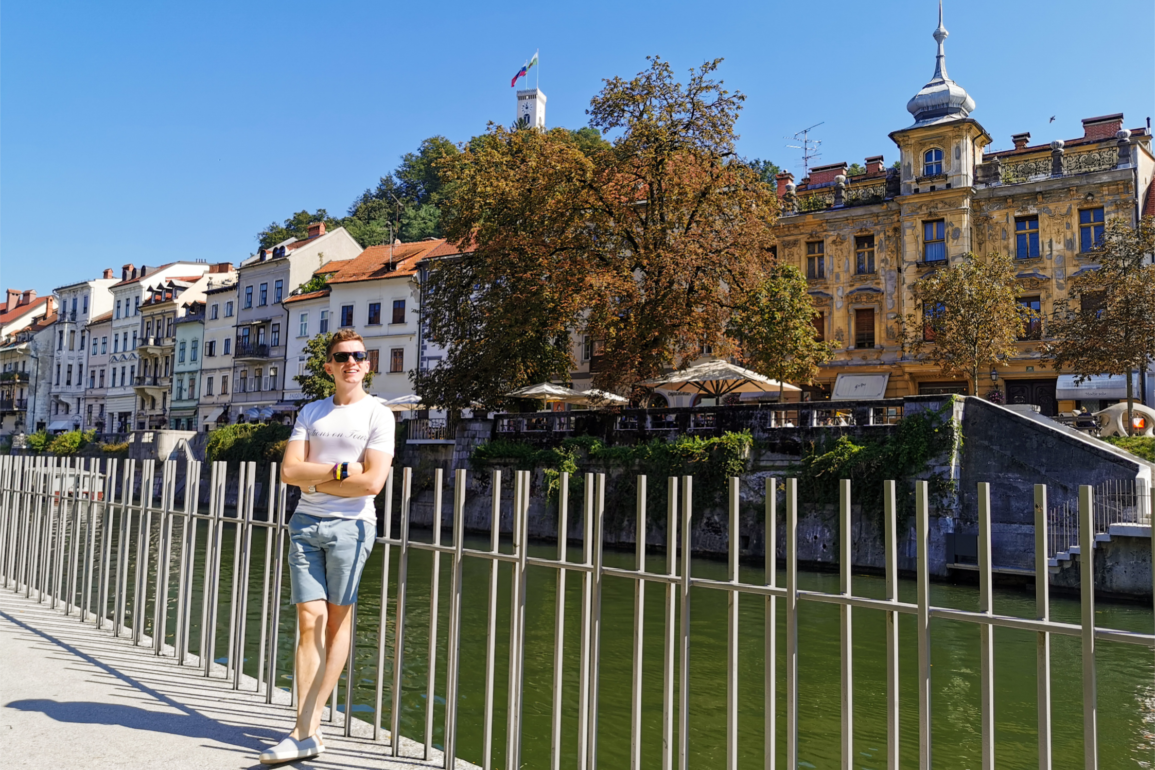 Ljubljana, the capital Slovenia, is a charming city that has so much to offer! It’s entirely pedestrianised city centre is a beautiful place to do some top notch touristing and simply soak up the atmosphere! Have a read to see why Ljubljana is so so lovely!

Before I start telling you all about this wonderful city, let me tell you about the Ljubljana Card. This is an absolute must for anyone visiting Slovenia’s capital. The best value Ljubljana Card costs €45 for a 72 hour pass. It includes virtually all of Ljubljana’s attractions. The best place to collect your card is at the Slovenian Tourist Information Office in Krekov Trg near the Central Market (between the Dragon Bridge and the Funicular to Ljubljana Castle).

When you buy the three day Ljubljana Card, there is a sightseeing tour of your choice included for no extra charge! I strongly recommend booking this in advance when you collect your Ljubljana Card as you will need a ticket they issue, you won’t be able to rock up to the meeting point and hope for the best. The added bonus is that holders of a Ljubljana Card have 24 hour access to the WiFi network “WiFree Ljubljana” free of charge.

For my sightseeing tour, I chose the Ljubljana Walking and Boat Tour (€17 without the Ljubljana Card) because it offered the best of both worlds. My guide was exceptionally interesting to listen to and he brought us all over the city explaining everything wonderfully. He then lead us to the boat that brought us down the Ljubljanica and gave us a totally new perspective on the city’s wonderful bridges!

This library is one of Plečnik, the famous Slovenian architect’s masterpieces. Tourists can only enter some areas of this building, most of it is restricted to students of the university and members of the library. However, you can access the stunning staircase surrounded by black marble that leads up to a black marble colonnade. That in turn is surrounded by big windows that allow light to stream in and creates a lovely atmosphere. There are usually free exhibitions that you can access on this level. This is, in general a quick enough visit, ideal if you want to escape the heat (or the often cool misty mornings) for a little break.

There are loads of things to see in this fantastic museum. Established in 1935, the museum features exhibits on Ljubljana’s history. Exhibits range from a 40,000 Neanderthal wooden wheel and axle, right through the Roman era, the Middle Ages, the Austro-Hungarian Empire and through the former Yugoslavia to the present day. The highlight is definitely the Ancient Roman Foundations and a section of the East Gates of Ljubljana’s Roman predecessor Emona. You can explore the excavation and the treasury housed here at close quarters. Even if you choose not to visit the main museum, it’s worth visiting for this section alone! There’s also a pretty cool section on one of the floors above where you can dress up like a Roman soldier for all the younger (and younger at heart!) visitors.

Ljubljana’s central square, situated on the banks of the Ljubljanica at the Triple Bride is a hive of activity. You can see all walks of life here from tourists, to students, to locals going about their business and to worshipers visiting the beautifully coloured Franciscan Church that sits on the square.

The most curious feature is the beautiful statue that was erected in 1905, surrounded by three trees (or as some would say, a small forest) in front of the Central Pharmacy. The statue is of the poet, France Prešeren, with his muse. As you can see, the more prudish residents of the time might’ve taken exception to it (due to the exposed breasts on the muse). In the 1930s, the architect, Plečnik, instucted the placement of three poplar trees to shield the provocative statue from those attending various religious ceremonies in the Franciscan Church.

Ljubljana Cathedral, or, St. Nicholas’ Church, was first established in the 1200s, but the baroque building that stands on the site today was built in the early 1700s. One of the church’s bells far predates this, having been made in 1326. The building’s Southern wall shows a Gothic Pieta (a copy of the one that was on the original church) and a pretty cool sun dial from 1826. The interior is adorned with beautiful frescoes that will keep art lovers entertained for hours! I found the church a lovely place to sit and reflect during the day and with a cost of only a few euro for entry, I feel it’s worth it, even if you only want to be nosey!

The wonderful Central Market of Ljubljana on Tržnica na Prostem and Pogačarjev Trg is open daily from early morning until late afternoon (except Sundays). It features many and varieed sights, sounds and smells! Locals flock here to do their grocery shopping and tourists come to soak up the atmosphere and to buy provisions for picnics and day trips. There are also some beautiful stalls selling souvenirs that are well worth a look! They are much nicer and often cheaper that the nearby shops selling the often mass produced bits and pieces.

The most unusual thing I saw at the market was a vending machine selling fresh milk! You could buy an empty bottle and fill it with fresh milk that is delivered regularly. You could also bring your own bottle and fill it. While browsing in the adjoining market, I saw several people using it while out buying groceries.

One of Ljubljana’s most unique attractions is the collection of water fountains around the city! The free app, “Tap Water Ljubljana” will show you where to find them. Why are they so interesting, I hear you ask? Well… They are often as odd as the day is long! They literally come in all shapes and sizes and include things like a kangaroo (near the funicular to Ljubljana Castle) and a weird hand shaped sculpture in a narrow street near the town hall.

Ljubljana loves it’s bridges. A LOT. There are loads of them and each one has something different to offer! There’s the Plečnik designed Cobbler’s Bridge (Šuštarski Most) designed in the 1930s with it’s cool columns. Next along the Ljubljanica is the Fish Footbridge (Ribja Brv) with the glass sides that offer a beautiful view of the Cobbler’s Bridge on one side and the Triple Bridge with Prešeren Square on the other. The Butcher’s Bridge (Mesarski Most) encourages visitors to place a lock on it’s wires to symbolise a couples’ love for each other! As well as this, it also boasts some pretty cool bronze sculptures!

My favourite two (I suppose I can say two), bridges are the Triple Bridge (see my slight dilemma) and the Dragon Bridge. The Triple Bridge (Tromostovje) sits at a turn in the Ljubljanica at Prešeren Square. Why three bridges in the one place, I hear you ask! Well. The wider, middle bridge was built first and it carried both pedestrians and larger traffic, usually horses or horse-drawn vehicles across the Ljubljanica. To avoid traffic congestion, the two (exclusively pedestrian) side bridges were built! Since then, however, the whole area has been totally pedestrianised (with the exception of the small electric vehicles to transport some people or goods). Still, it was a brilliant idea at the time!

Finally, the best known of Ljubljana’s many bridges, the Dragon Bridge (Zmajski Most). This bridge is responsible, in no small part, for maintaining the city’s name as the “City of Dragons”, for obvious reasons. The City of Dragons name stems from antiquity, most notably from the Ancient Greek Myth, Jason and the Argonauts. The story goes that after Jason stole the famous Golden Fleece, he fought and defeated a dragon here. In time, the dragon morphed into the symbolic protector of the city, embodying power, courage and wisdom.

How to Plan an Epic Road Trip

The bridge itself was built in 1900 when it replaced an earlier wooden bridge that was badly damaged during an earthquake in the late 1800s. It was built with reinforced concrete, a new idea at the time, and it was chosen to trial it in Ljubljana rather than Vienna so that if it were to go horribly wrong, the consequences would be much more minor.

Ljubljana Castle (along with the Dragon Bridge) has to be the jewel in Ljubljana’s crown! Not only because you can see it from almost everywhere in the city, but also because it’s a fascinating place, packed full of history and stunning views that you should DEFINITELY explore for yourself! This 900 year old castle sits atop a hill that towers 375m above the city below. The castle can be accessed by road or by foot. The best way is by funicular that leaves from Krekov Trg across from the Central Market. Entry is free with the Ljubljana Card, but if you don’t have one, entry costs €13 (€10 without the funicular).

There is so much to see and do up at the castle. There are some restored prison cells that reflect the castle’s function as a prison. It served this purpose twice, firstly during the days of the Austrian Empire from 1815 for a number of years and then again during World War II when the area was under Axis control. Other than that, the castle was principally used as a military fortification and in 1905, the city purchased it with the intention of turning it into a museum. Instead it housed poor families right up to 1963, when work began to turn it into the previously intended museum.

Speaking of museums, the castle has several! There are often temporary exhibits as well as exhibits on Slovenian history, a puppet museum and the unspoilt Chapel of St. George. You will need to retain your ticket/Ljubljana Card as they are scanned at the entry to each exhibit.

The Best Views in Town!

It is also possible to access the tallest tower, Outlook Tower (very aptly named!) using the double helix style staircase. This is where you will find the best views in the city!

If you don’t fancy tackling the spiral staircases, you can access the ramparts atop the castle walls. One of them even partially acts as an outdoor terrace for a restaurant! You can also walk through the grounds at the base of the walls. No matter where you go, be sure to find yourself up here at sunset, to watch it set into the distant foothills of the Julian Alps. Truly beautiful! Be sure to be up here a little before sunset if possible to make sure you have a good spot! Particularly if you want to get a few photos.

Ljubljana is the perfect destination for a city break! It’s delightfully compact, jammed full of intersting attractions, good restaurants and bars and friendly people. There are loads of top notch day trip possibilities too, like Lake Bled, Vintgar Gorge, Predjama Castle, Postojna Caves and Skocjan Caves to name but a few! The best thing is that is is VERY affordable! Don’t hesitate. Book your trip now!