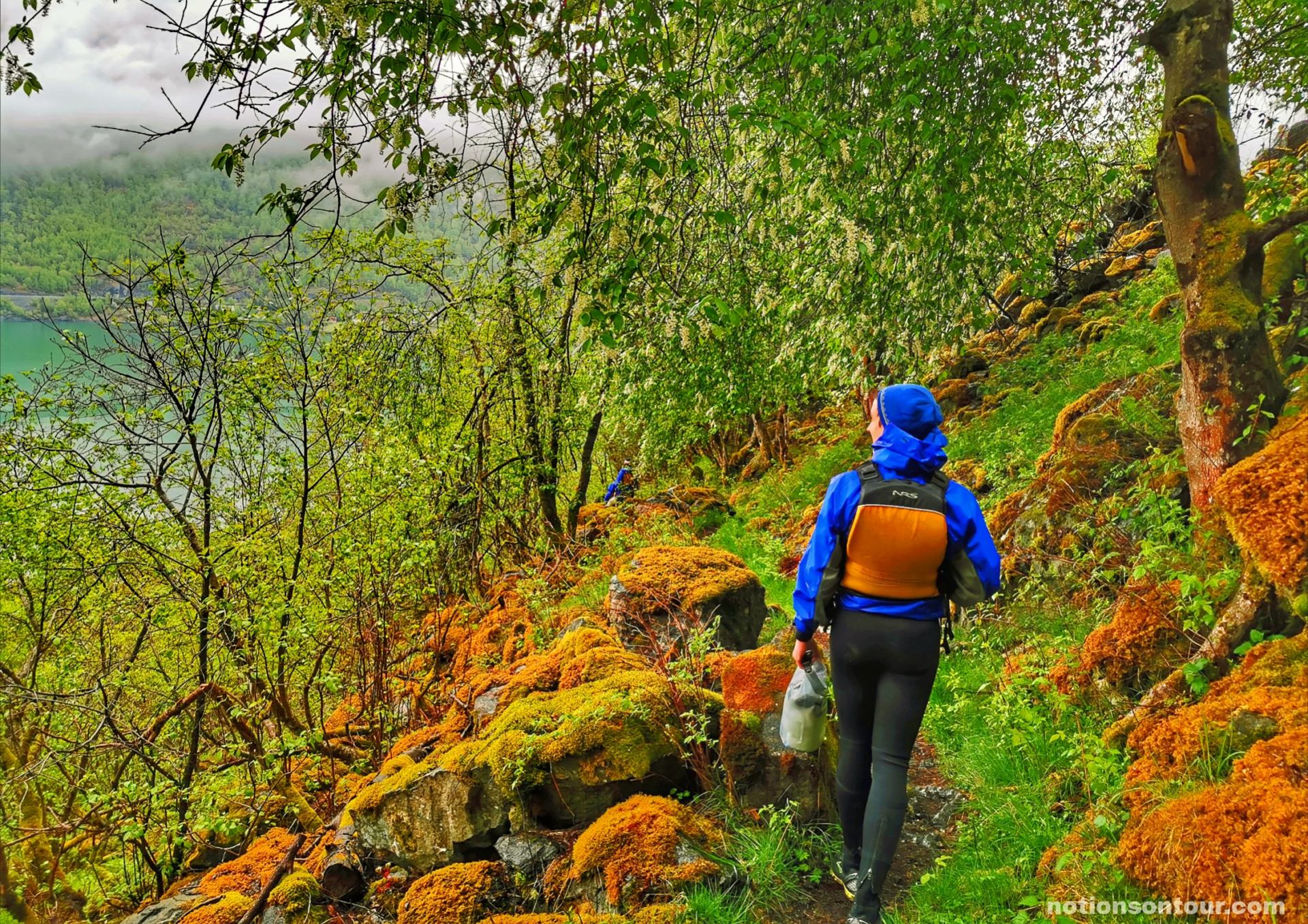 Kayaking in the Norwegian Fjords

Where do you think of when you think of fjords? Most people will think immediately of Norway, and rightly so! After all, the word fjord is a Norwegian one. There are almost too many fjords in Norway to count and as many fjord tours of varying shapes and sizes. The larger boats may allow you to see more of a given fjord, but, in my opinion, there are better ways to be at one with these magnificent feats of nature. How? By kayak!

I’ve already written about my kayak in Milford Sound, New Zealand. It was an epic 18km paddle and they recommend you have prior experience. You can read about it here. This kayak, with Njord Sea Kayaking is much more accessible to people of all abilities. Come on, tour the fjords with me and my notions!

What Makes this Kayak so Special?

Frankly, it’s not just a kayak! Njord Sea Kayaking have a unique experience that is accessible for everyone from pensioners to top athletes. They not only offer kayaks combined with camping over a few days, but they offer a unique kayak and hike combination that can be done in half a day! The tour starts at either 10 am or 3 pm from the start of May to the end of August. It costs NOK 910 (approx. € 93/£ 83/$ 106). They also offer a 10 % discount if you book online.

The hike is along part of the Old King’s Road that leads up from the banks of the Aurlandsfjord to a waterfall. Historically, it was a road used for travelling across Norway by two warring Norwegian Kings around 1200 years ago. A war that ended with King Harold Fairhair uniting all the minor Norwegian kingdoms into one. His descendants still sit on the Norwegian throne today!

What Aboout the Cold?

Firstly, be aware that this is Norway, a country not famed for high temperatures. I did my kayak in an unusually chilly day in May, or so I was told. Our wonderful guide went through all the gear that would help us overcome the chilly and rainy day. We each got a full, thick wetsuit, waterproof jacket, buoyancy aid and hat. We had already been briefed to bring other clothing, of which, you could wear as little or as much as you wished. I would strongly recommend a thermal base layer style top and bottoms and two pairs of socks. Gloves are NOT recommended as they get wet too easily and will actually result in your hands being colder than they would with nothing.

We were also provided with a dry bag for anything from our snack and a dry hat to any other bits you wished to take with you. There was also a dry box supplied for you phone. This was attached to the outside of the kayak for easy access should you wish to capture that all important photo.

Honestly, five minutes into the kayak, I didn’t feel cold at all! I reckon it was a combination of my entire body below my waist being completely sheltered in the kayak coupled with the extra body heat generated by simply paddling.

What if I’ve Never Kayaked Before?

That’s not a problem at all! You will be guided through everything including the basics of kayaking in a fun, non-judgemental way. You’ll pair up with you kayak partner and practice everything you’ll need to know for when you’re on the water. You’ll also be advised about what to do should the kayak capsize. By the way, this is extremely unlikely to happen.

As far as the kayak is concerned, it’s not too long, only a small few kilometers (which is actually quite short in general terms). Also, the Aurlandsfjord is, in general quite sheltered. The mountains on three sides are anything from 600 m to 1300 m (at the highest point) high and the only exposed side, leads onto the Sognefjord.

Is There Much to See?

Loads! There’s nothing like absorbing the amazing natural beauty of the fjord as you paddle along. Even though the weather wasn’t great and the clouds were lower, the fjord’s beauty wasn’t compromised. If anything, I felt that it added to the mystique of the landscape. Take a look for yourself!

On a clear day, the view would obviously extend farther up. To be fair though, there are so many interesting twists and turns down at sea level (yes, it is the sea that has extended this far in land!), that no matter how inclement the weather might be, you’ll still get a great view! I do think that the light rain that was falling enhanced the green of the lush valley around the fjord (on the bits that weren’t sheer walls anyway!).

We also stopped to look across to the far side of the fjord at a small collection of buildings. May sound odd, but there’s a reason. These buildings were a traditional Norwegian farm with the living quarters at the centre and the farm buildings around the edges. This farm has existed since about 800 AD, possibly even before that judging on some excavations that have been conducted. It’s called Otternes Bygdetun and it is possible to visit it once you’re back on land!

What About the Hike Section?

First thing’s first, it is uphill initially, but the gradient isn’t too steep. You will need good walking shoes though, the mud can be a little slippy in places if there has been a lot of rain.

Once you beach the kayaks and start walking towards the Fronnesvossen (Fronnes waterfall), the first thing you see is nine mounds of stones. Our guide explained that these are Viking Burial Mounds. All excavations have shown that all those buried there were facing the Otternes Bygdetun across the fjord. This suggests that this is where they lived!

Once you pass the mounds, you start your not too steep ascent of the Old King’s Road towards the Fronnesvossen. The climb lasts about 10 to 20 minutes roughly. I can’t remember the duration exactly, because I was loving it too much to note the passage of time! Once you get to a small clearing with a large rock, you stop and get loads of information about the fjord, the Old King’s Road and the Vikings while you eat the snack you brought.

There is a lovely view of the waterfall from here through the foliage of the trees. We did not proceed any further as the next section of the Old King’s Road wasn’t safe for hiking along. The descent is slightly faster, for obvious reasons. It also allows you to really absorb the nature that surrounds you, I mean, look at the beauty of it!

Another Reason Why I Loved Njord Sea Kayaking

The ethos of Njord Sea Kayaking is to leave no trace. This is a wonderful attitude to have. One I noticed is endemic in Norwegian society! We were asked, very kindly, to ensure we left nothing of our snack that we ate upon the Old King’s Road behind us, including scraps of food and general litter. It was abundantly clear that this amazing company is both conscious and respectful of nature and the surrounding countryside that they adventure through.

One thing along these lines that really stood out was this: I was sharing a kayak with our guide. While paddling along the fjord, he spotted a piece of litter floating in the water that was out of his reach (Something I didn’t even see!). He called back to one of the kayaks following behind and asked them to pick it up as they passed. I feel this small gesture towards Mother Nature spoke volumes. Well done!

What About the History of the Old King’s Road?

Although I haven’t studied history since my Junior Cert (a state exam we do in Ireland at about 15 or 16 years of age), I’m still very interested in it. I tend to visit places that have an interesting history to them. The Old King’s Road did NOT disappoint! During the snack break, you learn all about the warring Norwegian Kings that traversed the Old King’s Road and how the eventual winner, Harold Fairhair became King of Norway as I’ve already mentioned.

What I didn’t expect was, on our return to Flam, we stopped at a fairly ordinary looking buoy in the water. Here we learned about the Estonian steamship “Begonia” that was sheltering from German forces here in 1940, under what used to be an overhanging rock. The ship was spotted by German reconnaissance planes. They tried to sink it, but kept missing and dropping their bombs on the nearby Flam. The local Norwegian Resistance asked them to move on for this reason, but first the entire crew were brought to Flam to enjoy a drink. While there, the Resistance boarded the empty ship and scuttled it. It now lies approx. 15m to 20m below the surface. If you have the correct training, I understand you can dive on the wreck which is still relatively intact and resting on it’s keel.

I, as you may have already guessed, LOVED it! The scenery combined with the history was perfect for me. If I have one complaint, it is that I would have loved it to have been longer. But, to be fair, if it was, then it couldn’t have possibly been as inclusive for all abilities. If you are visiting the fjords of Norway, go to Flam. Allow not only time for the amazing train journey on the Flamsbana, but make sure you give half a day to explore off the beaten track and walk in the footsteps of Vikings on the Old King’s Road.