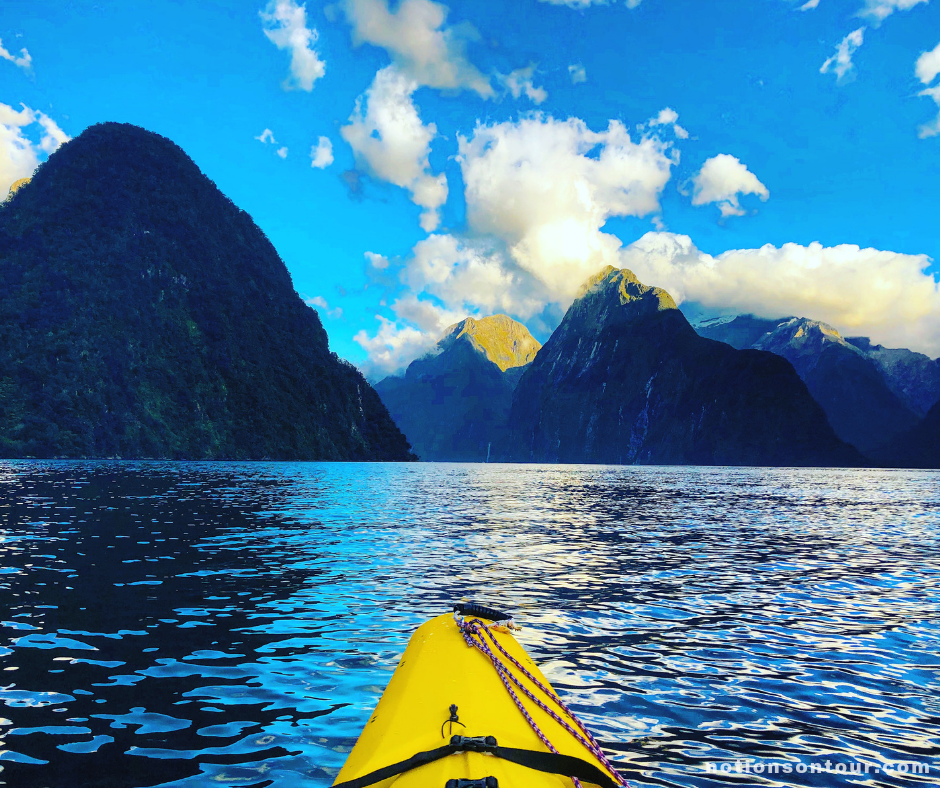 The perfect way to see this absolute wonder of nature!

When I visited Milford Sound in the Fiordland (not Fjordland as I had thought it was spelt) area of Aotearoa New Zealand, I went on a dawn kayak of the fjord with Rosco’s Milford Kayaks. I chose the Morning Glory adventure which was listed on their website as tough. It certainly was! Even though there was good weather that morning, this was a physically tiring kayak. Saying that, it was TOTALLY worth it! Here’s why…

Getting to Milford Sound

I arrived at Deepwater Basin at about 05:45 that morning after a drive of a little over an hour and a half from my wonderful AirBnB in Te Anau. This drive in itself was strange because for the whole journey, I didn’t meet or see another car! It was almost as if there had been an apocalypse and nobody had told me! Once I got closer to my destination, you could just about make out the deeper darkness imposed by the mountains surrounding the road, something I only got to appreciate the beauty of on my return journey! This drive is an epic sight, second only to Milford Sound itself!

Our day started with a briefing about our 18km paddle (right out to where it meets the Tasman Sea!) and we got our gear. We were paddling in three tandem kayaks with our guide in a fourth. Once we had selected our paddles we set off in the shallows of the ironically named Deepwater Basin! Fortunately I was in the front section of the kayak, which meant I got wonderful photographs! Photographs of what has to be one of the most jaw dropping things on the planet.

Out on the Water

This photo is one of my all time favourites, although it doesn’t do Milford Sound justice. The sun was rising as you can see from the light on the tops of the mountains and the only thing out on what is normally a busy stretch of water due to the tourist boats was our four kayaks! No sound only the chatting between us and our guide and the water lapping against the kayaks and paddles. It was noting short of idyllic!

Our guide was very knowledgeable and she informed us that the lowest of all the peaks surrounding us was 900m above sea level! The most iconic of these is the Mitre Peak, which rises an impressive 1,692m above the waters of the sound! It was on a scale that makes my mind melt! We passed the beautiful Lady Bowen Falls (162m) (one of the two permanent waterfalls), which were on the opposite side of the fjord to us.

Up Close and Personal with Milford Sound

As we got closer to the, in many cases, almost sheer sides of the surrounding mountains that plunged straight into the sea, were almost entirely covered in vegetation. The guide then explained how the various different types of moss and lichen allow the trees to grow on the bare rocks. Apparently it soaks up the moisture and forms something akin to the nutrient rich soil the trees and shrubs need to grow. Perhaps the botanists among us can explain further.

Just as we were starting to get used to the wondrous sights around us, our guide directed us over to the northern side of the fjord where we saw the side of the mountain known as the lion and the magnificent Stirling Falls. This waterfall is a sheer 155m drop into the water (about three times the height of the famous Niagara Falls!).

Stirling Falls and Beyond

She asked us to raft our kayaks together. She explained that we were now going to paddle closer to the waterfall as close as we could do so safely to experience some of the sheer force of them. We donned our hoods, stowed our cameras in the dry bags and paddled forward. The closer we got, the harder it got to paddle. The force of the falling water felt immense! We got to paddle under some of the light spray and had been instructed not to paddle too close and not to have the kayak side on to the falling water as this might lead to us capsizing.

As we paddled further, the wind coming in from the Tasman Sea became more pronounced, as did the current flowing down it. This meant that in some cases it became more difficult to paddle. Our expert guide ably told us how to minimise this. It became clear why Rosco’s specified you should have prior kayaking experience before undertaking this epic paddle! The wonderful sights kept coming though! Another waterfall (one of the temporary ones) was pointed out on the far side of the fjord. It looked tiny compared to the surrounding peaks. We were told that it was about 75m high! It really gave us all an appreciation of the sheer scale of everything!

Getting Back to Shore

By this stage we were nearly at Dale Point at the mouth of Milford Sound and the large tourist boats had started traversing the waters too. We now had the wash from these boats to contend with too. Our guide radioed the water taxi to come and collect us once we reached Dale Point and poked our noses out into the Tasman. The guide and water taxi skipper loaded up the kayaks and we boarded the water taxi to go back to Deepwater Basin. This journey made us truly appreciate the journey we had undertaken and gave us a last fleeting glimpse of all the wonders we had seen on the way.

My adventure on the waters of Milford Sound will live with me for the rest of my life. It was something so awe inspiring, stunningly beautiful, peaceful and wondrous that there is no way I could forget it! I would highly highly recommend the Morning Glory kayak with Rosco’s, once you’re up to the stamina of an 18km paddle. If not, one of their other adventures might suit your experience/fitness level. If my experience is anything to go on, they will all be equally excellent! If you can at all, definitely tour Milford Sound by kayak and not the large tourist boats. You get so much more of a personal service and you feel so much more in tune with the natural wonders around you. Definitely one for the bucket list!