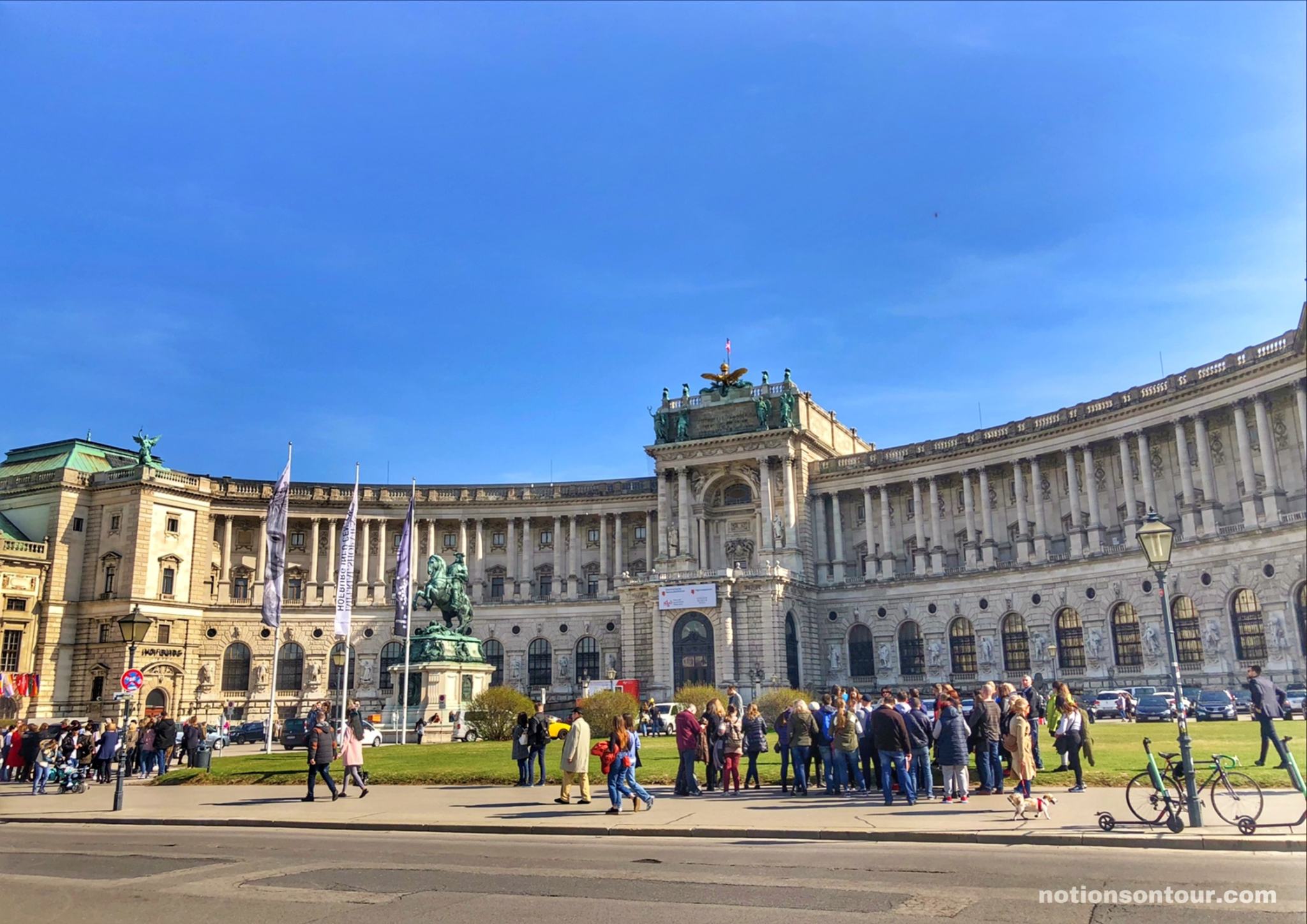 It’s all Happening at the Hofburg

The Hofburg is one of the largest buildings I have ever seen! It was once the Winter Palace of the Austrian Imperial Family. Now, it holds everything from several museums, two libraries, a chapel, a treasury, the official residence and offices of the Austrian President and a is a temporary home for the Austrian Parliament while the Parliament Building is being refurbished. The best thing from a tourist point of view is that EVERYTHING (except mass with the Vienna Boys’ Choir performance) is free entry with the Vienna Pass!

The Imperial Silver Collection houses thousands of wonderful pieces. It includes many different forms of table settings, dating back hundreds of years that were either gifted to, or commissioned by the Imperial Family. The Austrian President and Government use some of these items of cutlery, plates, platters and other pieces of table wear for State Banquets.

If this is your thing, then the rooms housing the Silver Collection will literally be like heaven. If you don’t care a huge amount, but still want to see parts of it, then the audio guides and maps will guide you through a highlights tour. The craftsmanship of these pieces is utterly breathtaking, especially given the age of them. The most spectacular of all are the massive and intricate centrepieces. Many of these have mirrors along their bases to reflect candlelight. Some of the most fascinating exhibits are the pieces used by the Emperor and Empress every year at Easter time to wash the feet of twelve “commoners”. This was a tradition borne of their deep catholic faith.

The Sisi Museum leads directly into the State Rooms. You enter via the Emperor’s Staircase (the only section in which photographs are permitted). The Sisi Museum is, as you might expect, dedicated to the iconic Empress Elisabeth (Sisi). She was a Bavarian Royal who married Emperor Franz Josef. She was instrumental in bringing about the dual monarchy of Austria-Hungary in 1867. After the death of her only son, Crown Prince Rudolf and his mistress by murder-suicide in 1889, Sisi withdrew from official duties and dressed only in black. She travelled widely and on a trip to Geneva in 1898 she was assassinated by and Italian anarchist. You could definitely equate her to the Princess Diana of her day.

The exhibits in the Sisi Museum detail all of this and more. There are exhibits on everything from her beauty regime to her fitness. She was exceptionally fit and took part in sports of all kinds. She even had her own gym in the Hofburg which you can visit as part of the State Rooms! There’s also a mock up of some of her magnificent gowns and jewels which she wore during her coronation as Queen of Hungary. The original jewels are no longer in existence. There’s also a reconstruction of the train carriage she used to travel all over mainland Europe, which is quite cool.

The State Rooms are fascinating! You visit everything from the room where the Emperor received anyone that wished to seek counsel with him. They would include nobles and commoners alike. The rooms are all heated using stoves fuelled from a servants’ corridor behind the Royal Apartments and State Rooms to prevent ash smoke entering them.

You will also be able to visit the private apartments of Emperor Franz Josef and Empress Sisi. For me, this was both very interesting and quite strange. I couldn’t help feeling that I was intruding on these private areas belonging to another person. Although internally conflicting, I think having these feelings is testament to the staff of the Hofburg who manage to preserve them as their previous occupants would’ve kept them.

The Imperial Treasury is accessed from the Schweizerhof (Swiss Courtyard). This place, as the name indicates is an utter treasure trove! Photos are allowed in here, but between the glass cases and the low light (to avoid damage to the items being exhibited), the quality isn’t great. The range of items on show is vast! You can see the ceremonial robes worn for the coronation of the Holy Roman Emperor, as well as the Imperial Crown of the Empire. You can also see the Austrian Crown Jewels (the Imperial Crown, Sceptre and Orb)!

Also on display is the crib used for the only son of Napoleon, Franz, and other Napoleonic artefacts. Why, I hear you ask? Well, Napoleon’s second wife, Marie Louise was a Habsburg. There are loads of catholic artefacts here too. The Habsburg Family were deeply catholic people, and the Treasury reflects this. The most awe inspiring things in the regard are a fragment of the True Cross and one of the nails used to nail Jesus to the cross!

The Spanish Riding School is home to the famous white Lipizzan horses and is possibly the most famous centre for classical dressage in the world. It is also the oldest, having been founded in 1572 and was named for one of the breeds of horses used to found the Lipizzan breed.

It’s possible to attend both performances and training sessions in the famous Winter Riding School which is accessed just inside the Michelerplatz entrance. Tickets for the performances can be quite expensive. If you hold a Vienna Pass, then tickets to the morning exercise are free! This is what I did. There is no assigned seating for the exercise sessions, so to get a good seat, you will need to arrive early. In the high season, you will need to get there even earlier if you want to get in at all!

The exercise begins at 10:00 am. There are four sessions, lasting 30 minutes each. If you are into horses/dressage, you will remain utterly captivated for the whole time. If not, then you might find it all quite similar. Personally, I was under pressure to see loads that day, so I stayed for the first hour and then went to see other parts of the Hofburg. Photos are not allowed when the horses were in the arena. I did manage to get a quick one between training sessions.

The Burgkapelle (Imperial Chapel) is usually only accessible for religious services. Although utterly splendid, the chapel itself is not the real attraction here. That honour lies with the Vienna Boys’ Choir. This famous choir was founded in 1498 and is widely known throughout the world for their boy sopranos. I had the distinct pleasure of securing a ticket to see/hear them on St. Patrick’s Day. They perform at mass every Sunday for most of the year. Check out their website to find out more and book tickets. I booked mine through www.viennaoperatickets.com (I am not affeliated, nor have I been asked to or paid to promote their booking site). You will need to book several weeks in advance to be sure of getting a ticket.

All I can say about the music was that it was utterly utterly amazing! As soon as the Vienna Boys’ Choir started singing, literal shiver went down my spine! Possibly the most hauntingly beautiful sound I’ve heard! If you’re any way musically inclinded. This is an absolute MUST!

This is not something I had planned to visit. When I was walking through the Hofburg Complex, I stopped to look at one of the tourist info maps they had on display to get my bearings and saw a photo of the interior of this marvellous place! So I decided to take a look for myself! I was not disappointed!

This library is like something straight out of Hogwarts! The only one I’ve seen that can rival it is the Long Room in my Alma Mater, Trinity College, Dublin. It contains some wonderful statues. I honestly could have stayed in here for hours taking it all in, but it was a last minute decision and closing time was approaching so time was limited. As you can see, the architecture is stunning and the ceiling frescoes are utterly fantastic!

Ok, ok I know the Kaisergruft (Imperial Crypt) isn’t part of the Hofburg, but it is a short walk away. This surreal subterranean set of rooms is the final resting place of generations of the Royal Habsburg Family. There are intricate coffins dating back centuries. Many are adorned with sculptures that are decidedly creepy. Such as this one of a skull wearing the Imperial Crown of the Holy Roman Empire.

The largest tomb houses the remains of both Emperor Franz I and Empress Maria Theresa. This is also the most opulently decorated and even has a fresco on the ceiling overhead! It is such a relief that these tombs and remains survived both the abolition of the monarchy and two World Wars.

The most recent (and final) additions to the Kaisergruft are Empress Zita and her son Crown Prince Otto. The last Empress of Austria’s remains were brought here following her death in exile in 1989 and in 2011, those of her son, Crown Prince Otto joined them. Her husband Karl I’s remains lie in both Portugal (body) and Switzerland (heart), but there is a bust to his memory in the same chamber.

The Hofburg is full of magnificent squares, but these two are definitely the best! When you arrive at the Hofburg, do so using either of these squares. It’s the best way to capture the awe, beauty and scale of the whole place. Bear in mind, they are actually only SMALL sections of the whole Palace!

This is what you see, just before you walk in through the Michelerplatz entrance. This is the one closest to the entrances to the State Rooms, Sisi Museum, Imperial Silver Collection and the Spanish Riding School. It’s also just down the road from both Cafe Central and Cafe Demel if you fancy a coffee or slice of cake in an amazing Viennese Cafe.

The other (and more magnificent) square is the Heldenplatz, which means hero’s square. The building itself now houses a library. The square outside though is one you could literally sit in and look at all day.

It has one downside sadly. That is the fact that the Plaza immediately in front of this section of the Hofburg serves as a car park. I understand that it is a necessary part of the operation of a working Palace of this nature and that space is limited in the area.

There is another unfortunate piece of history connected to the Heldenplatz. The balcony pictured above, is the one from which Adolf Hitler addressed those loyal to him following his successful Anschluss of Austria in 1938. It was a little chilling to stand there and look up at it, wondering if anyone assembled there knew what atrocities would follow. I wonder if anyone there at the time, knew just how evil the man speaking to them, of his idea of a Third Reich and his vision of a Master Race. Please don’t let that spoil your experience of what is an otherwise beautiful place to pass some time.

Yes! Definitely! On your trip to Austria, you definitely need to visit the Hofburg! You will need to set aside a full day to experience everything and book in advance for the Vienna Boys’ Choir (and Spanish Riding School if you want to see a full performance).

The one thing I would say is that seeing everything could cost you a fortune, so it might be best to invest in a Vienna Pass before visiting. Believe me, it’ll pay off in the long run!

If you haven’t much time to spare, or don’t want to devote a full day to the Hofburg, I would recommend prioritising the Heldenplatz, Michelerplatz and the State Rooms/Sisi Museum. It’ll give you a great feel for the place, especially if your short on time.