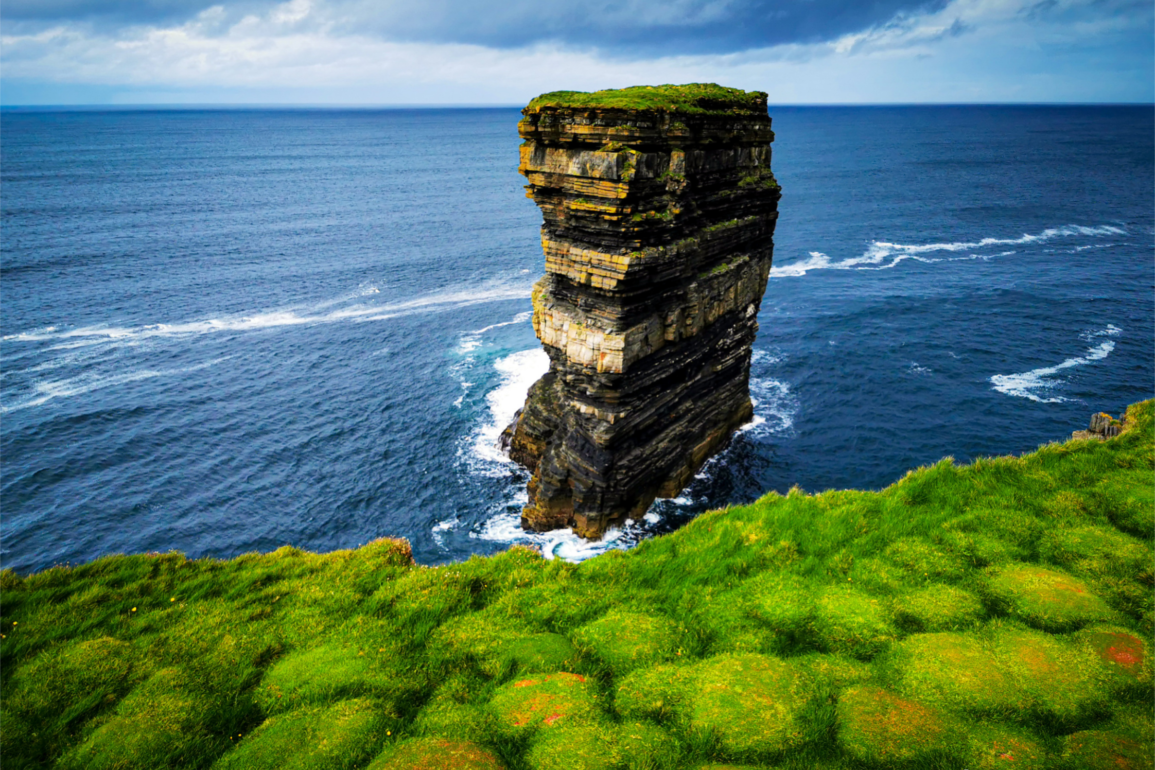 Downpatrick Head on Ireland's Wild Atlantic Way is a feast for the scenery lovers and history buffs alike!

Downpatrick Head on Mayo’s North coast is possibly the place I’ve visited that has both the most and the most diverse things to offer! The best part is that it’s totally free to visit! Located just outside the North Mayo village of Ballycastle and 20 minutes from the Céide Fields (the world’s oldest field structure), it’s a definite highlight on the Wild Atlantic Way! If you want to make a longer trip out of your visit, you can’t opt for a better place to stay than the nearby Mount Falcon Estate!

There’s a decent sized car park for visitors. It’s also a relatively short walk up a not too steep hill to the cliff edge. Here, the showpiece of Downpatrick Head, the sea stack, Dún Bríste (Broken Fort) will greet you.

Dún Bríste is not just the showpiece for Downpatrick Head, I think it’s one of the absolute highlights of the whole Wild Atlantic Way! The sea stack is just over 100m offshore and it stands 45m above the sea. Although it might not look it, the surface of it is almost 40m long and 15m wide. As it’s impossible for land based predators to get to it, it’s a haven for nesting sea birds such as puffins, cormorants and kittiwakes.

Legend has it that Crom Dubh, a Druid Chieftain, lived on what is now Dún Bríste. After he refused to convert to Christianity, St. Patrick struck the ground with his staff and the stack separated from the mainland, leaving Crom Dubh to die on Dún Bríste.

In reality, it separated from the coast in 1393 by high seas and violent stormy weather when the land bridge broke off. It’s thought some people who lived there were taken off using ships ropes. In 1980, scientists discovered the ruins of two stone buildings and an opening they suspected was to allow sheep to pass from one field to another.

Poll na Sean Tine, similar to Dún Bríste, has a legend surrounding its origin. We’re back to our friends St. Patrick and Crom Dubh again! Crom Dubh attempted to throw St. Patrick into an eternal flame. St, Patrick foiled him by scratching a cross into a stone and casting it into the fire. The fire then collapsed into the sea, leaving the hole behind. Hence the name, Poll na Sean Tine (Hole of the Old Fire)! During the 1798 rebellion 25 men, Irishmen and French soldiers, lost their lives taking refuge on the ledge at the bottom, killed by the incoming tide.

Poll na Sean Tine is a large blowhole with an underground tunnel to the sea. In stormy weather, when the sea is very rough, the blowhole has expelled foam and vapour that can often look like smoke rising from a fire. This gives further justification to both the name and the legend!

It’ll come as no surprise to learn that Downpatrick Head takes its name from the Patron Saint of Ireland, St. Patrick. The man himself, as well as featuring in the legends, founded a church here. The ruins of a leter church mark the site. At the centre of these ruins stands os statue of St. Patrick, erected in the 1980s (to replace an earlier one from 1912).

Every year, on Good Friday and Garland Sunday (the last Sunday of July), mass is celebrated at Downpatrick Head. Many faithful people make the pilgrimage to Downpatrick Head for this in order to pay homage to St. Patrick.

Yes, you read that right. World War II. There are two aspects of Downpatrick Head I have yet to tell you about! Both relate to this period in history. The most obvious of these is the small building with the bay windows looking out to sea, Similar buildings were dotted all around the coast. The Irish Coast Guard constructed them between 1939 and 1942. They used the installed telephones to monitor and report all sea traffic passing by. Almost all of these buildings were built using the same plans, so it can be surreal when you see them in totally different places. Have a look at the full list here!

This lookout post (LOP) was number 64, This is quite relevant because close to it, built into the ground is a giant sign saying Éire 64. The 64 relates to the number of this lookout post, as I’m sure you may have guessed. The Éire sign was placed there to literally tell all passing aircraft, be they Allied or Axis, that they were above neutral Ireland. This particular sign was likely directed at the American aircraft flying across the Atlantic.

The keen observer will notice there’s a slight error………. The next photo is me correcting it!

I really hope you enjoyed touring Downpatrick Head on the Wild Atlantic Way with me! I implore you to go and see this wonderful place for yourself!