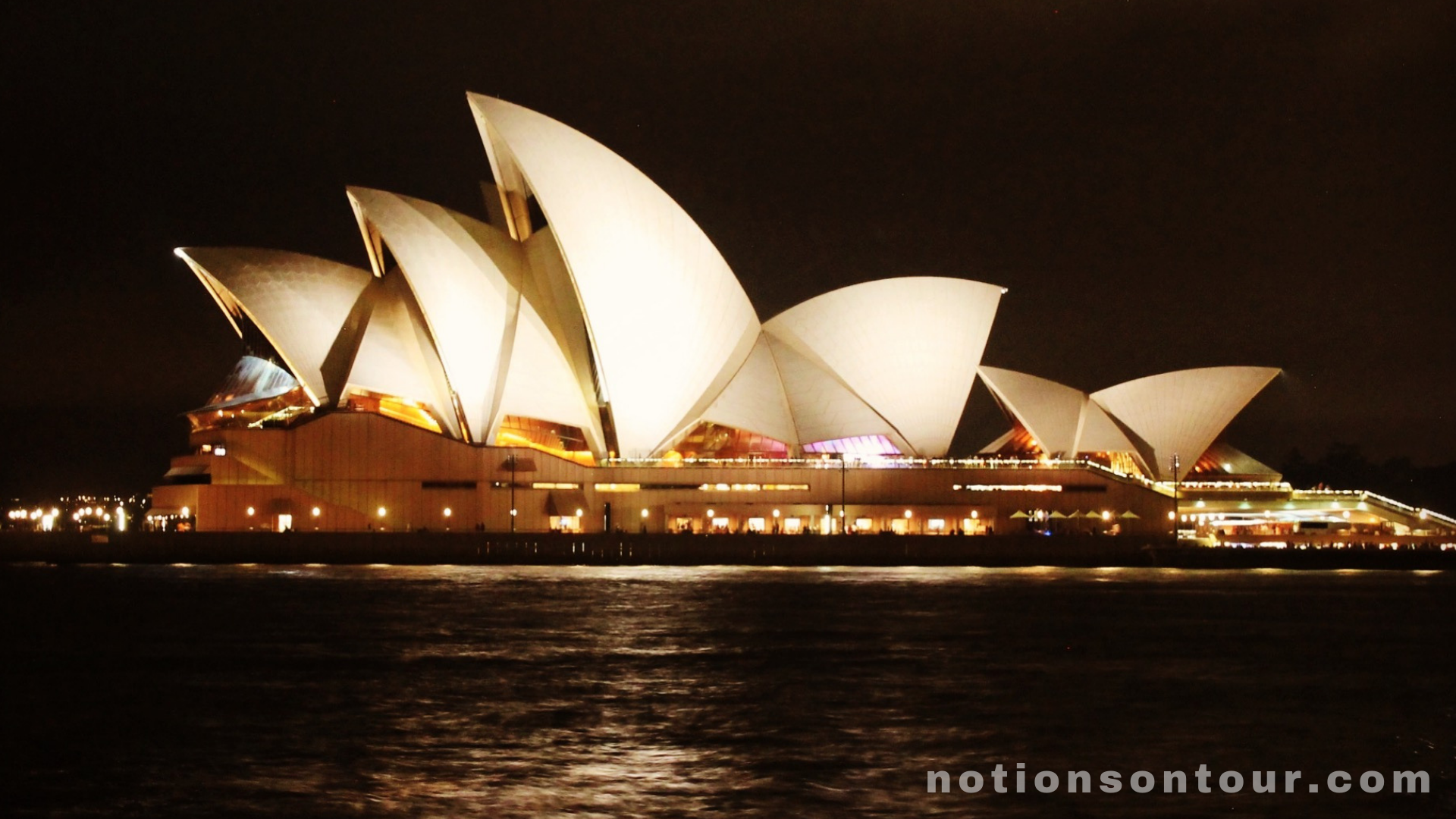 Backstage at the Sydney Opera House

We all now what it looks like from the outside, but what does it look like behind the scenes?

Once I knew I was going to visit Sydney, I wanted to make sure I got to see as much of this wonderful building as possible! First, I booked tickets for the night I arrived to see The Merry Widow in the famed Opera House. I brought my friend Aisling who I was borrowing a couch from for a few nights and who had never seen anything there before then. The production was spectacular! Sublime costumes with a beautifully designed art deco set. The orchestra were flawless, as were the performers on stage. They were able to capture the light humour of the story without sacrificing the performances and their intricacies. The whole experience was utterly fantastic and one I highly recommended!

Anyway, on to the tour. We were given a meeting time of 7:00 am! I’m guessing this was so that we would be finished the tour by the time all the necessary staff surrounding the performances would not be disturbed in going about their day’s work. I had selected to collect my tickets at the box office, something I don’t do until that morning. Problem was, I arrived at the Opera House at about 6:30, but I couldn’t see any staff members around, at all. The time for the tour to start was fast approaching and I was starting to worry.

I decided to go looking for the backstage entrance, which I eventually found, nice and close to where I was waiting. When I found it, I decided to go in and hope they had my ticket there. I walked in and was immediately greeted as Dylan. They had it after all (Thank God!). I presented ID to confirm I wasn’t just a chancer (Irish term for a random person who is trying to charm their way into something) the tour began!

We were briefed about the photo policy. This basically was, that photos were allowed to take all the photos we wished except in areas specified by our guide. After being presented with our high visibility vests we were on our way. First step was to pose for a photo in front of a green screen. This was to have souvenir postcards or a photo book done and available for purchase at the end of our tour, something I did because, well, why not! From there we were led through the labyrinthine back stage to the Concert Hall which seat 2,700 odd people but is able to maintain a lovely intimate feeling! I even sang a few notes on the stage to fulfil a dream (Disclaimer: In my imagination the auditorium was full and not empty!).

From there we were led to the scene dock below the Concert Hall stage in the Joan Sutherland theatre. This was the same stage that I had seen The Merry Widow on two days previously! The crew had stored the set for the show down here. During the interval they would roll the set onto a special gigantic lift that would then bring it to stage level. Once it was there, they would swap it over with any pieces of set that were no longer needed for the second half of the performance.

We were then brought to The Studio Theatre. This is one of the smaller venues. The stage extended like a catwalk into the downstairs level of the auditorium. It’s normally used for less conventional forms of theatre such as cabarets and even circus style acrobatic performances. In a previous life it once served as a library.

After that we were brought to the Joan Sutherland Theatre through the orchestra pit and up onto the stage. The set was even more spectacular close up than it was at a distance. I’ve done lots and lots of plays and shows myself down through the years. Because of that, I wasn’t surprised to see that the sets were largely made of timber. This is fairly similar to the sets I’m used to Wexford. In general, the finishing effects were similar too. The correct effects were created using other simple and lightweight material that had been creatively manipulated in various ways. We weren’t allowed on the part of the stage that had been treated to look like high polished marble. We were still allowed to take photos. Here’s some, including this rather special one from the conductor’s podium.

The Dressing Rooms and Rehearsal Space

We also got to access some of the dressing rooms that were currently not in use! They included this one that had a beautiful panoramic view of the Sydney Harbour Bridge and Circular Quay.

From there we went to a rehearsal space that was marked out with several different colours of tape to denote the spacings on the stage of the set and positioning of props. There were some specific props and pieces of set there to assist with the rehearsals and others were represented by specific blocks if needed. There were also some generic pieces of costume there so the performers could use them to practice how their costume would flow during performance.

While there, we were afforded the opportunity to visit The Drama Theatre, Utson Room and Playhouse too, but copyright restrictions meant that we were unable to take photographs in them. The Drama Theatre was especially interesting because they had a performance on at the time I visited that involved its of animal puppetry, which, although we couldn’t touch, we visually examined very closely. The intricacies of these creations were amazing! We also got to visit the flies! It was interesting to see that some of them were mechanically operated while some were still hand operated. Having seen both independently in the past, it was nice to see this, almost transitional phase, where both were in use.

Another fascinating thing about the Sydney Opera House was that all roads lead to the Green Room. There was one massive Green Room for all the theatres with monitors everywhere so that performers could keep an eye on their performance if they were snatching a quick snack. The clocks also ran a few minutes fast for this reason too. This was to make sure they were all where they should be for curtain up! Again, because people were going about their day’s work here, we were asked not to take photos.

After all that walking around, we had built up a fair appetite as you could imagine. Luckily, there was a breakfast included in the tour! A breakfast, which was both very welcome and delicious! How much was all of this I hear you ask, it was AUS $ 148.50 incl. tax. Steep for some people, but as I have a huge interest in all things theatrical, I felt it was totally worth it! If you’re even mildly interested in theatre, or indeed of the workings of this magnificent building, it’s definitely money well spent. If not, it might be worthwhile doing the normal tour, especially if you’re travelling to Sydney from great distances. Let’s face it, not only are you on holidays, but as I keep telling myself, “Sure I’m this far, I might as well!”