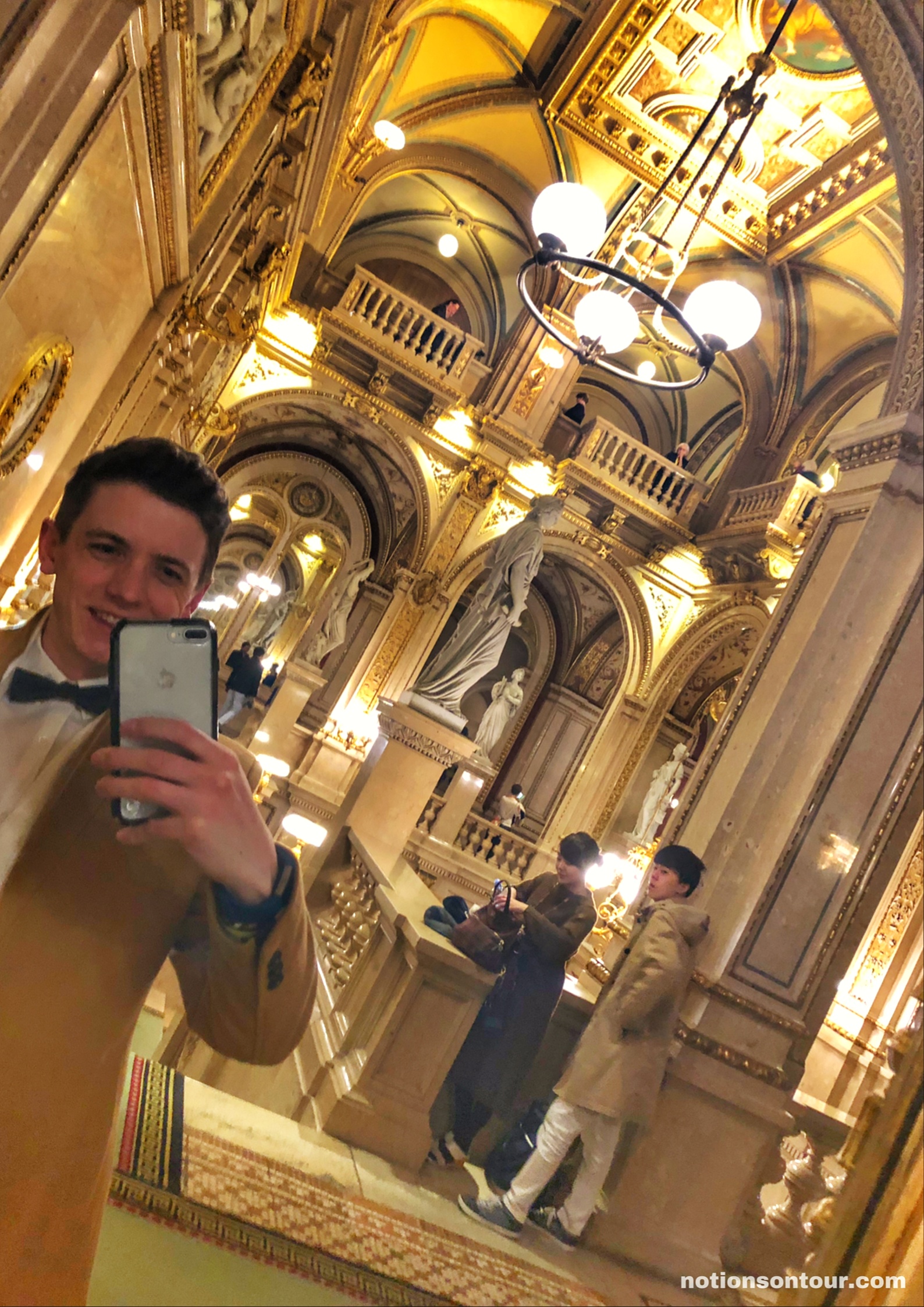 Attending the Opera in Vienna

Ok, so before I start Opera is so so common in Vienna. There are opportunities to buy tickets to everything from full operas, to ballets, to concerts, to recitals and everything in between. I think attending the opera is one of those bucket list things. The other thing I need to point out before we start is that the price of tickets and the quality can vary hugely. If opera/theatre is your thing then don’t go near the people selling tickets on the street. If you don’t mind, you could be lucky and get some great entertainment for a good price. You might not be lucky though.

As you might know already. I’m big into theatre/drama so I went for the real deal in the Wiener Staatsoper (Vienna State Opera House). I had the pleasure of attending both the opera, Don Giovanni and the ballet Le Pavillon d’Armide/Le Sacre.

I had no idea how to deal with this before I went. At home, if people were to attend the Wexford Festival Opera, they would be dressed to the nines! Most people wear black tie and evening gowns (ideally not at the same time though! Haha). I felt this would definitely be carried on to Vienna too.

Alas, I was only half right. About half of those attending were dressed up really well, although I was one of the few in black tie. Most were wearing suits with/without ties and the women were in nice formal/semi-formal dresses. Other people were perhaps a little underdressed, wearing clothes they looked like they had been wearing all day. These were very much in the minority. Everyone else was fairly dressed up.

It’s quite easy. The Staatsoper is on the famous Ringstrasse that circles the Innere Stadt. If you’re staying in that area it’s very walkable as the streets are pretty much flat. The tram stops on the Ringstrasse right across the road from the opera house and the underground station Karlsplatz has an entrance right outside too! There’s always the option of taking a taxi too. There’s no need to worry about trying to find one to get back to where you’re staying/going to next as they literally queue up outside when the performance is over.

Never mind the performances (which are spectacular), the real star of the show is the building itself. When you arrive, use the main doors at the front. That way you get the full effect of the magnificent foyer. The building itself fell victim to allied bombs in the closing weeks of World War II. Fortunately, the front section including the spectacular foyer had been walled off and it survived intact, right down to the beautiful frescoes on display. The auditorium and stage, however, weren’t so lucky. They were completely destroyed by fire following bombing in 1945. The props and scenery for over 120 operas and about 150,000 costumes were also destroyed.

Back to the foyer, you ascend the main staircase with your jaw somewhere around your ankles. Words cannot begin to describe the whole area! The frescoes that adorn the ceilings are utterly exquisite. The upper level consists of spectacular stone arches and statues. Don’t take my word for it, have a look for yourself.

At the top of the staircases that ascend either side of the main staircase there are massive mirrors that are perfect for one of the most epic and fancy looking mirror selfies you could hope for! See!

This room was first used for performance on 25th May, 1869 when Mozart’s Don Giovanni played to, among others, Emperor Franz Josef and Empress Elisabeth (Sisi). Although destroyed by bombs and fire in 1945, the auditorium has been beautifully rebuilt. It retains a wonderful sense of grandeur. The central ceiling chandelier is a more modern donut shape. There are boxes around the sides of the auditorium and for both performances I was in one of the boxes.

I felt attending Don Giovanni was quite special as it was the first performance here almost 150 years ago. There were small individual screens that provided some information about the production and the Opera House before curtain up and during the interval. During the performance it displayed subtitles in either German or English if you wanted to utilise them. From the box I was in for Don Giovanni, I had a spectacular view of the gigantic orchestra, who were, in themselves, quite interesting to watch.

The seats available range hugely from the parterre, to the boxes, to the balconies on the upper levels. Obviously these vary hugely in price. The least expensive tickets are the standing tickets on the top balcony. From where I was sitting they looked to have a fairly good view of the stage, but if you do book these, be aware that performances can be quite long. Don Giovanni was about three and a half hours long. La Pavillon d’Armide/Le Sacre was a bit shorter at about two and a half hours. There are also standing tickets at the rear or the parterre that you choose for a better front on view.

I really enjoyed both performances! If I had to choose I’d probably pick Don Giovanni because of the historical significance. I was very tired when I went to see it, as it was day I arrived in Vienna. My day had started at 2 am that morning in order to drive to the airport in time for my flight. I then had a solid five hours touristing once I arrived. Despite the exhaustion, Don Giovanni managed to hold my attention. The set and costumes were very intelligently designed. There were so many different aspects to the set that kept revealing themselves as the opera progressed. There was a wonderfully intelligent rake on the stage sloping down to the downstage right corner.

The performances by those on stage were excellent! The singing sounded utterly effortless and they captured a few moments of delightful humour in what can be an otherwise serious opera. The climax (which I won’t detail for fear of spoiling it on others) was captivating. The acting and singing was sublime and the intelligence of the movement of set and props as well as the excellent lighting left it a moment of theatrical genius.

The second performance I attended was La Pavillon a’Armide/Le Sacre. It is, for those who don’t know, a combination of two separate ballets. La Pavillon d’Armide was the first half. It was everything you’d expect from a ballet. You could see all the dancers, especially the principle dancers perform with every fibre of their being. They gave it socks and boy did it pay off! On occasion it can be quite challenging to figure out what the story of a ballet is. This isn’t the case with this piece. Although for both it, and Le Sacre, the programme should have included a brief synopsis of both pieces.

Le Sacre was, how should I put this, unconventional. It was a mixture of ballet and contemporary dance. The dancers were all dressed in, essentially flesh coloured underwear and nothing else. The lighting was impressive throughout and the opening with all the dancers marching was excellent. Once again the dancers knocked it out of the park. This piece wasn’t to my taste, but from the audience reaction it was clear others did. It was also good to see less conventional genres of dance get this prestigious a performance.

Yes, yes, 1000 times yes. I loved every minute of these evenings! Everything from walking into that spectacular building in black tie to the performances themselves was a wonderful experience! The only downside I found was the cost of the tickets. I wasn’t surprised about this however, seeing how musical theatre shows and performaces in the Royal Opera House in London demand similarly priced tickets. If your budget allows for a night out at the Vienna State Opera, you will definitely not regret going! Make sure to include it when you visit Vienna. Definitely and wonderful Notion-y Bucket List experience!