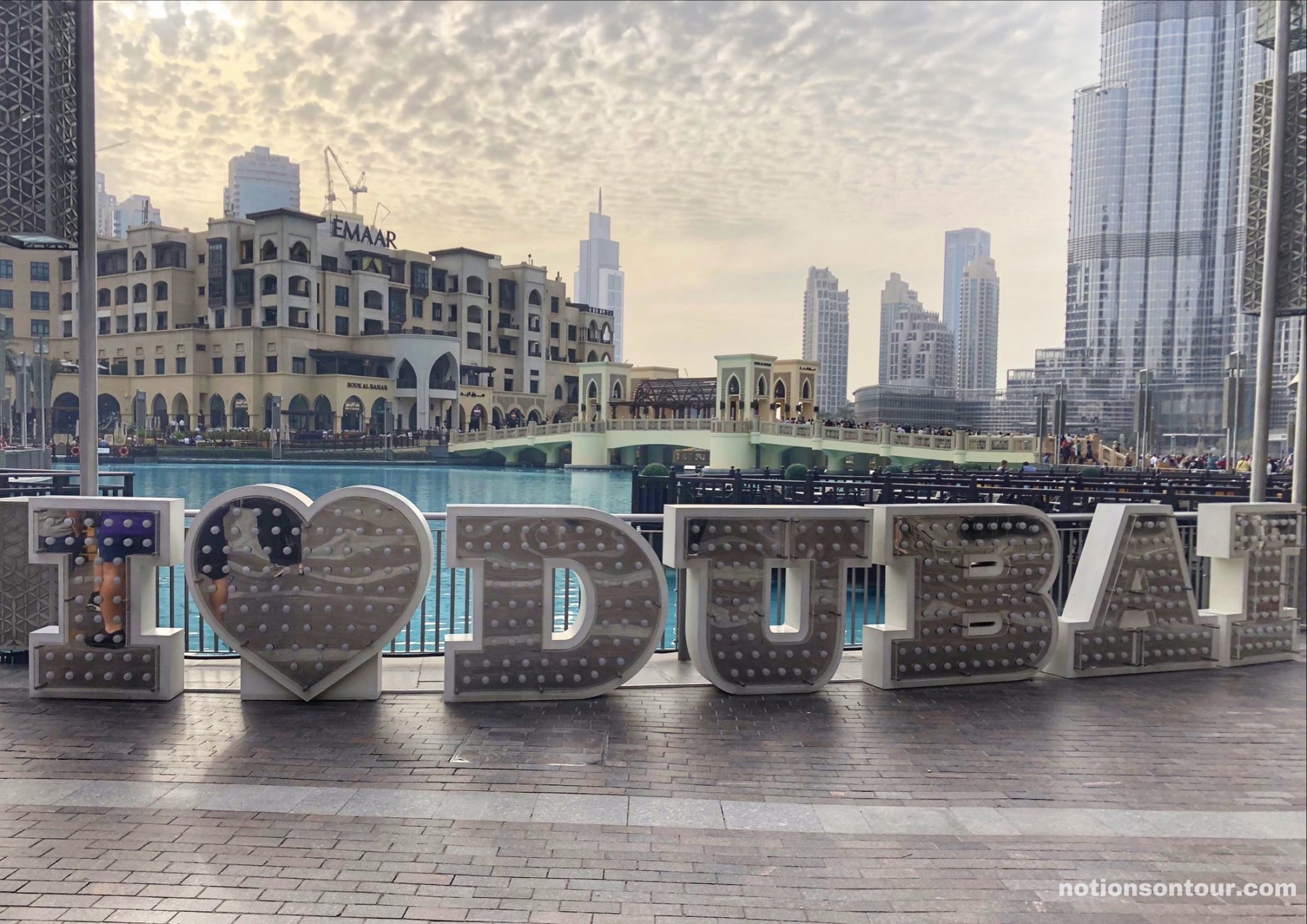 A Day in Dubai

While I was visiting my friend Niamh in Abu Dhabi, I decided to take the opportunity to visit Dubai on a day she was in work! The first thing I have to say is that there isn’t a huge amount of public transport in the United Arab Emirates. This left only one practical, and also notion-y option, a taxi. Dubai is about an hour and a half of a drive from Abu Dhabi, but the taxi option wasn’t as expensive as you’d expect. For the return journey, it cost a total of AED 380 (approx. € 95/£ 80/US$ 105). My very chatty taxi driver collected me at the apartment building and dropped me off literally at the base of the Burj Khalifa.

I had one main objective that day, to scratch something off my bucket list and go to the top of the Burj Khalifa, the tallest building in the world at an eye-watering height of 828 metres! My taxi dropped me off in an area that was actually the entrance to the private apartments/offices so I had to explore further. I strolled around the base of it to see where I could go in. I couldn’t find it, but I did get this wonderful photo that now hangs on my wall. It’s amazing the unique photos you can get by going slightly off the beaten track.

Getting My Ticket for the Burj Khalifa

Next thing I know, I’m at a large artificial pool where they do the half hourly water and light show in the evenings! Still no sign of the entrance so I thought I’d go into the Dubai Mall because they’d have free WIFI. Long story short I found out if you don’t buy tickets online there’s a booth in the Mall where you can either buy a ticket or collect pre-purchased ones. As I hadn’t expected to be going to Dubai that day (I had just landed in from Melbourne that morning), I had no choice but to hope there were some left…

I had some time to wait (it was only barely lunchtime) so I decided to explore the Mall. This was partially because it is the second biggest shopping mall on Earth, so there would be lots to see. It was also because Dubai is so large that it makes LA look small and compact, so I wouldn’t really get to see much else. Boy was I not disappointed!

The Mall really was utterly vast! There was every shop imaginable in it! There were shops ranging in type and price range from Abercrombie and Hollister to Chanel, Dior and Cartier, from Apple to Lego and so many many many more, 1200+ in total! The mad thing was that the very high-end shops were nearly as busy, if not busier than the more ordinarily priced shops. In my experience the most I had ever seen in shops like that before was a mere handful.

The Mall was jammed full of things like the photos above of balloon sculptures and pagodas decked out for Chinese/Lunar New Year. There was even a plan for Dubai’s next big building project! While wondering around I came across the much fabled aquarium. To be fair aquarium doesn’t do it justice. This is a literal aquatic zoo! It stretched from the floor to the ceiling of the whole section of the mall! I took some photos, but you literally couldn’t get far enough back to take in the whole thing! This had everything in it from turtles to sharks and every kind of aquatic creature in between!

Along with the aquatic zoo, the mall also boasted several cinema screens, an ice-skating rink and not one, but two indoor waterfalls!

Getting that Photo of the Whole Burj Khalifa

Once I had finished exploring the Mall I decided to have a look around outside, now that the intense midday sun had passed. My main goal was to scope out a good spot to watch the fountain show that evening. I didn’t realise until later that my Burj Khalifa ticket also gave me access to an exclusive boardwalk too! I also wanted to get a photo with the whole of the Burj Khalifa in it. This proved way more difficult than expected both with my phone and the big camera. Here are the best of what I managed to get…

Next thing I knew the time had come to ascend the famous building. I went to the entrance (through the mall). I had no idea what queue to go in. Turns out I had bought a VIP style ticket that instead of going up to the normal 124th and 125th floors, I had access to the 148th floor too! A kind representative directed me to the correct (and shortest!) queue. We were shepherded through security when enough of the group had arrived. The normal security queue was even stopped and we got prioritised! From there we went to an exclusive waiting room where we were all served Arabic coffee and dates as we waited for our briefing.

Once the formalities were over, we joined another fast track queue to ascend to the 125th floor. From there, my ticket allowed us to gain access to another lift to bring us to the highest public access floor, the 148th, an eye-watering 550m straight up! We were greeted with a drinks reception complete with canapés as soon as we stepped into the Sky Lounge! There was free access around the whole floor with the option to visit the outdoor area. For those of you who may be afraid of heights, we were very safe. The space between the barriers was at about chest height and it was about 15cm wide. Here are some of the photos I got from the 148th floor:

Yes, that is about an 80 storey skyscraper that I got to look down on! There was a very plush loo and a small shop off the Sky Lounge. I’m a sucker for a good gift shop (and a plush loo!). Naturally, I decided to get a few souvenirs for my family and myself. The only time restriction I had was the closing of the floor for the night. Once you had your fill of the 148th floor, you could descend to the 124th and 125th floor. Here the view was the same, but slightly less spectacular, as you’d expect. There were also lots of games and interactive experiences, as well as a larger gift shop.

I then decided to go and see the world famous fountain display. My ticket also gave me access to an exclusive boardwalk out on the surface of The Dubai Fountain to view this. So naturally I did so. You need to be selective about where you watch it, as some areas are prone to getting splashed! That night, the water jets were choreographed to the classical piece “Oh Mio Babbino Caro”. Although the boardwalk access wasn’t necessary to view the fountains in full flight, it was a nice touch. Plus, it meant you could be assured that you’d get an unobstructed view too! Apologies for the quality of the photo, but it’s a screenshot from a video. I promise the display is spectacular!

Was it Worth it?

Sadly after this it was time for me to leave. I had to meet a taxi I had booked to take me back to Abu Dhabi. In conclusion, I loved my day in Dubai, but you can’t fully experience the delights of Dubai in one day! I’m waiting for the day when I can return to Dubai to visit it properly!

I will say that I reckon I was exceptionally lucky to be able to get the ticket I got to ascend the Burj Khalifa on the day. I’d highly recommend booking as far in advance as you can. This is to ensure you get both the ticket type and time that you want. Booking ahead will also allow you to investigate the types of ticket that are available. It’d be preferable (in my opinion), to plan your trip to Dubai to the last minute I made to visit Dubai that day to experience the true wonders and delights it has to offer.